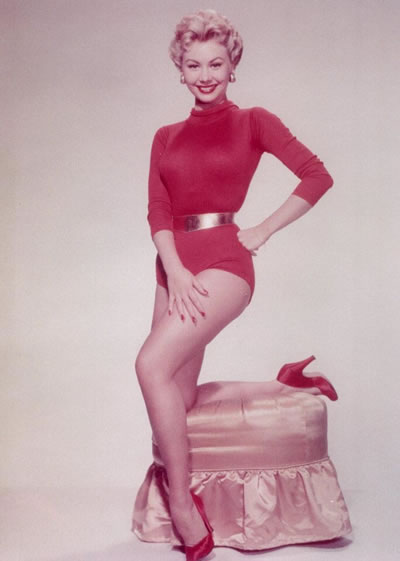 It’ll be some enchanted evening as glitzi Mitzi, the show-stopping star of South Pacific, regales the crowd about working with such legends as Marilyn, The Merm (as in Ethel ), Gene Kelly, Frank (as in Sinatra ) and many more. Queried by our favorite Hollyweird Square, the fabu Bruce V., Miss Gaynor will serve up lots of happy talk about the making of her classic films South Pacific, There’s No Business Like Show Business, Les Girls, and Anything Goes, and her countless TV specials. And e-specially for this gala, there will be a rare screening of Mitzi’s 1975 Emmy-winning TV special Mitzi and 100 Guys, co-starring Bob Hope, Michael Landon , Andy Griffith, Ted Knight and a bevy of wonderful guys!

But wait, as they say in the infomercials, there’s more: Matthew Martin in a tribute performance to leggy Mitzi, the Singing Seaman leading the aud in a sing-along medley from South Pacific (Bloody Mary’s not included), sin-sational Gaynor career clips, and the piece de resistance, Mitzi by Mackie, a selection of some of Gaynor’s classic Bob Mackie costumes on display. Helloooo, how gay(nor) is that?

Partial proceeds benefit Project Open Hand . So, before you wash that man right of your hair, hurry to get tickets for this once-in-a-lifetime event. Call (415) 863-0611, tell them Out There sent you, and get $5 off the ticket price. It’ll make you feel younger than springtime! Well, at least younger than August.