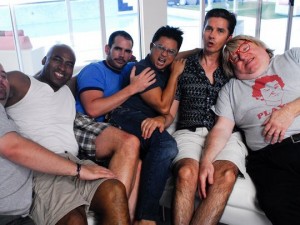 When Cinema Diverse premiered in 2008, the lineup was 15 films, including “Shelter,” a coming-of-age romance produced by J.D. Disalvatore.

Ten years later and with 91 films, the line-up has grown significantly, but it still includes a screening of “Shelter,” a coming-of-age romance produced by J.D. Disalvatore.

“It’s interesting because J.D. Disalvatore just passed last week … and she was such an icon in Los Angeles in terms of lesbian filmmakers and was just really such a part of our history. And we’ll have a special moment before we screen that film to kind of honor her memory,” he said.

Another “big deal” festival event is a planned appearance by Armistead Maupin, the immensely popular author of “Tales of The City” series of novels which spawned a few television miniseries.

The opening night will feature a screening of “The Untold Tales of Armistead Maupin,” a film by Jennifer Kroot which tells the story of the renowned author from conservative to gay rights pioneer and includes interviews with Sir Ian McKellen, Laura Linney and Olympia Dukakis. It will be followed by a Q&A with Maupin and a presentation of a Lifetime Achievement Award. He then will sign copies of his new memoir, scheduled to be released in October.

“We’re getting advanced copies of his new memoir that’s coming out. We’re going to have it early so he’ll be signing copies of that. I’m really excited,” said Green “That’s going to be the big big deal.”

Right before the Maupin screening, audiences will see an 8-minute short called “Zeitgeist 1977,” a tribute to the first gay and lesbian film festival in San Francisco 40 years ago.

“So that’s kind of fun. It was the first in San Francisco, they were using Super 8 film and they were mostly getting it developed in Harvey Milk’s photo shop and (there’s) just a lot of history with it. It’s kind of cool and it’s ironically the same exact time Armistead started writing and got his first book published,” added Green.

While last year saw many films that addressed the divide between mainstream religion and the LGBTQ community, this year has a prominent selection of movies that touch on the international treatment of the LGBT community.

“I think a lot of it is immigration being a big topic. There are so many people from so many parts of the world that are trying to immigrate,” said Green. “They are escaping persecution because they are LGBT. It’s a very poignant topic.”

The film festival closes on Sunday, Sept. 24, with a full slate of films including the Palm Springs premiere and 10th anniversary of the docu-comedy “Laughing Matters …The Men,” from filmmaker Andrea Meyerson and featuring six comedians including Bruce Vilanch and Andre Kelly. Meyerson, Vilanch and Kelly are all expected to attend the festival, said Green.

Another closing day highlight is the screening of the third season of the Emmy-nominated “Eastsiders” produced by Kit Williamson and John Halbach, who married in Joshua Tree, live in Silver Lake and enjoy weekend trips to Palm Springs. The screening includes four episodes filmed on location in 16 different states from New York to Silver Lake and one episode shot in Palm Springs in July.

The filmmaking duo, who also appear in the show, are excited to bring most of season three to Cinema Diverse after a screening at OutFest in Los Angeles and a sneak peek at SeriesFest in Denver. They appreciate the interaction with other filmmakers and like-minded filmgoers.

“When you go to film festivals like these it’s a great way to meet other filmmakers who are passionate about the same kind of work. It’s also a great way to connect with audiences who are specifically seeking out LGBT content like ours. So they’ll come to this festival knowing that they want to see gay stories and if they weren’t familiar with our show before they could find our show there,” said Halbach.

“Yeah, we’re in a vacuum as filmmakers, as the storytellers … and I think it’s important to stay connected with the people that engage your work,” added Williamson who also writes and directs the series.

The show, which started as a web series on YouTube in 2012, follows gay couple Cal, played by Williamson, and Thom, played by Van Hansis as they deal with infidelity and life. Halbach plays a straight guy named Ian. Other show characters include Constance Wu from “Fresh of the Boat” who plays Kathy, Stephen Guarino of Showtime’s “I’m Dying Up Here” who plays Quincy, Willam Belli who plays Douglas and Traci Lords who plays Cal’s mother. Season 2 is currently available on Netflix.

The season 3 episode filmed in Palm Springs follows couple Quincy and drag queen Douglas, whose car breaks down in the desert while on their way to a drag gig. The idea for this episode came after a fan of the show, who owns a vacation rental in Palm Springs called The Burton House, reached out to them via Instagram and said he’d love to host them for a filming of the show. So Williamson came up with this Palm Springs-specific episode.

This will be Williamson’s second time to Cinema Diverse. He starred in a movie “Kiss Me, Kill Me” which screened there about two years ago.

“We love to go to festivals like these and I think it’s really important to support other people’s work. Having been making the show for five years now we understand what a miracle it is that anything ever makes it across the finish line and I think when anything gets done that should be celebrated,” said Halbach.