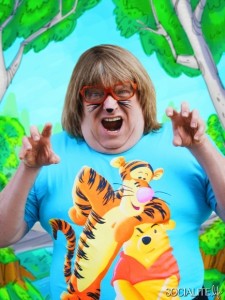 Pro tip, hunties: It’s not very elegant for a lady to spit… unless she’s spitting beats, that is.
On the next episode of RuPaul’s Drag Race, airing Monday night at 9 p.m. ET on Logo, the queens are tasked with reading while rapping, and they have some serious guest judges to impress. In an exclusive clip below, hip-hop divas Eve and Trina see one team of queens — including Adore Delano, whose experience under the American Idol spotlight fails her when it really counts — werk their way through the beat-dropping challenge.

But that’s not all! EW can exclusive reveal that Drag Race will be “Rupersized” on April 7, airing back-to-back episodes. Leah Remini and My Big Fat Greek Wedding‘s Lainie Kazan will guest-judge during the first episode of the night (starting at 9 p.m. ET), and the second hour will see panel appearances by Jaime Pressly and Bruce Vilanch. As they say, double the pleasure, double the tuck!