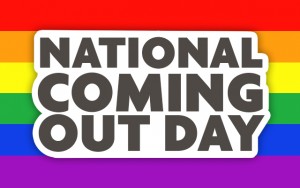 NEW YORK, NY — Logo today announced it will symbolically censor LGBT content on-air and online in a show of solidarity with international LGBT people who live in countries where positive LGBT media images are invisible or banned. The unprecedented ‘Day of Disruption,’ part of Logo’s international LGBT project, Global Ally, takes place on Tuesday, October 11 on National Coming Out Day, a day dedicated to celebrating coming out and living openly as LGBT. This year, Logo is flipping the script and providing a glimpse at what life could be like in countries where LGBT people can’t turn on the television, open the newspaper, or go to social media to see positive and relatable images. During a marathon of “RuPaul’s Drag Race” Season 8, Logo will symbolically censor LGBT content, display facts about international LGBT issues, and provide ways to stand in solidarity with LGBT people who cannot or do not feel safe to come out and live openly.

And a video of an activist originally from Iran on how lack of LGBT media images impacted his coming out:

Candis Cayne, Gus Kentworthy, Trace Lysette, Jason Collins, Geena Rocero, Billy Porter, Omar Sharif Jr., JD Samson, Alec Mapa and Bruce Vilanch will appear on Logo throughout the ‘Day of Disruption’ to speak out about the 72 countries where being LGBT is criminalized and the 10 countries where gay and lesbian relationships can be punishable by death. Logo will also release videos of activists from Russia, Iran, Singapore and more discussing how media censorship impacts their lives.

The ‘censored’ marathon of “RuPaul’s Drag Race” Season 8 starts at 6am ET/PT on Tuesday, October 11. During the marathon, openly LGBT contestants and guests will have their eyes blocked by a black bar, drag outfits will be pixelated, and audio bleeps will disrupt LGBT content. A static graphic will feature facts about LGBT criminalization laws, ways to take action at Logo’s GlobalAlly.org, as well as statistics from the ILGA-RIWI 2016 Global Attitudes Survey on LGBTI People. Content on LogoTV.com, NewNowNext.com, and Logo’s social media channels will also be disrupted and direct followers to take action in solidarity with the global LGBT community at http://globalally.org/censoryourself.

The all new and highly anticipated finale of “RuPaul’s Drag Race All Stars” will air Thursday, Oct. 13 at 9pm ET/PT.