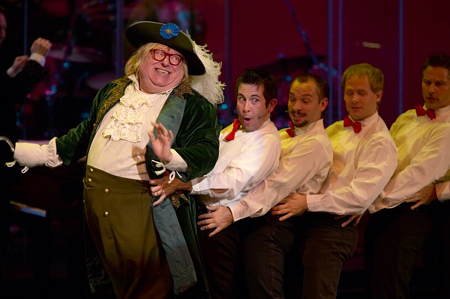 For any of us who came of age during the 1970s, the era was a pop smorgasbord of fashion, art, culture, and music. From the iconic John Travolta inSaturday Night Fever, to the music of ABBA, to classic TV series such asÂ All in the Family,Â The Mary Tyler Moore Show, andÂ The Carol Burnett Show, such references have not only helped define my generation but inspired in others an ongoing love for all things ’70s.

Actor/singerÂ Michael VaccaroÂ is attempting to capture that spirit in a new Web series,Â Child of the ’70s, which isÂ currently fundraising at Indiegogo. An indie actor in such movies as Todd Verow’sÂ Deleted ScenesÂ andÂ The Endless Possibility of Sky, Michael also won a MAC award for Outstanding Musical Comedy Performer and has recorded two CDs,Â ArchangelÂ andÂ Wait for Him.

To createÂ Child of the ’70s, he has joined with friend and collaborator Terrence Moss as co-writers. Terrence is an independent writer based in Los Angeles who operates a website for long-form content,Â terrencemoss.com, consisting of articles, commentaries, reaction pieces, essays, actor/actress profiles, and an ongoing short fiction series.

The two recently met with me to discuss this shared love of the ’70s and how it helped inspire their new series.

Kergan Edwards-Stout:Â Michael, what is it about the 1970s that entices you? Is it the music? The TV shows? Something more?

Michael Vaccaro:Â All of those — and more. It was a magical era. Look at TV alone. It was the best TV ever! I mean, Mary Tyler Moore, Bob Newhart, Cloris Leachman, Valerie Harper, Carol Burnett, Bea Arthur, and Esther Rolle — and so many more. Back then TV was interesting, smart, and funny — and unafraid, just like the people who were coming of age then.

Edwards-Stout:Â That was your time, huh?

Vaccaro:Â Yeah, I was young and really cute, and I could get into clubs and drink and have sex with hot bartenders! You could dance and go home with strangers, and everybody was doing it, and no one cared or judged. It was before we all started dying, and I remember such a sense of freedom and abandon.

Edwards-Stout:Â So you associate it with freedom…

Vaccaro:Â Exactly. There was a sense of achieving whatever dream you had. Take cinema — also the greatest decade. Actors and directors and writers were unafraid, fearless, raw. It’s all pretty much sucked since. And music? No one can tell me there’s a greater album, an album that better captured the feelings of an entire generation of people, thanÂ Saturday Night Fever.

Edwards-Stout:Â With your new Web series,Â Child of the ’70s, you’re hoping to capture some of that?

Vaccaro:Â I wanted to do something really fun that brought back many of the actors that I loved from that time. I’m casting a few of my absolute favorites, though I can’t talk about who just yet. So many deserving of attention. Look at the amazing resurgence of Betty White! I want to do that for a few of the people who helped make my childhood happy!

Edwards-Stout:Â Terrence, how did you become involved in writing the project with Michael?

Terrence Moss:Â Michael knew of the short story series I write for my website, as well as the pieces I had written about theÂ Bitter BartenderÂ Web series, and asked if I’d help him writeÂ Child of the ’70s.Â We met once a week for five consecutive weeks and wrote one episode each week.

Edwards-Stout:Â What about the Web series intrigued you?

Moss:Â Even though I only caught the very tail end of it, I feel a special affinity for the 1970s — the music, the TV shows, some of the movies, the social change. I liked the concept. And on a personal note, I liked that Michael was taking this part of his career into his own hands. I wanted to help with that.

Edwards-Stout:Â Is the tone reminiscent of those classic TV shows, such asÂ Laverne & ShirleyÂ orWelcome Back, Kotter?

Vaccaro:Â I’m interested in capturing the feeling ofÂ Love, American Style. There’s a “look” from the ’70s that I adore: dark, grainy, saturated with earth tones. I’m trying to recapture that look. HD is so very clear and clean and bright, so I’m actually using older cameras.

Vaccaro:Â I also love sarcasm, and it seems to me that everybody on television in the ’70s was sarcastic. Rhoda, Maude, Phyllis… I love that, and we’ve made our lead character, Carlo, pretty sarcastic, but also smart, lovable, and, again, unafraid. He’s also gay, and I wanted to mix that ’70s sensibility with a gay sensibility, which is what Heaven will be like for me.

Edwards-Stout:Â The series follows Carlo, who uproots his New York life to move to Los Angeles, as the personal assistant to his favorite ’70s TV star, played by Ann Walker, who was so memorable inÂ Sordid Lives.

Vaccaro:Â Yes, Carlo has quite a few eerie similarities to the character of Rhoda Morgenstern. He was born and raised in the Bronx, he has a sister named Brenda, and two overbearing parents, except his are Italian. He moved out of the house when he was 24. He meets and falls in love with a man named Joe.

Edwards-Stout:Â Now, a lot of that sounds like you!

Vaccaro:Â Yes, I can tell you that I, Michael Vaccaro, also grew up in the Bronx, moved out of the house when I was 24, and fell in love with a Joe. And a few years later, I took a job as a personal assistant to a movie star, which I did for a couple of years, so I have lots of stories!

Edwards-Stout:Â Now, I know that aside from your creative work, you also once worked for Broadway and film legend Lainie Kazan. Any stories you can tell us?

Vaccaro:Â Hmm… plenty of stories. None that I can actually tell. She is fantastic. Lainie’s funny, interesting, gregarious, and very generous. She truly does light up a room. I’m hoping she’ll be in the series. I have something really juicy in mind for her.

Edwards-Stout:Â You’ve assembled a great cast, including funny man Bruce Vilanch. What character does he play, and how did he become involved in the project?

Vaccaro:Â I’ve known Bruce for years. He’s a great friend, and he’s brilliantly funny and smart. I don’t know anyone who gives more of his time to different causes. He appears at absolutely every charity event! So I just called him and asked if he’d do it, and he said yes. His character will become a major part of Carlo’s life in Los Angeles.

Edwards-Stout:Â I went to college with another of your stars, the multi-talented Duane Boutte. Prior to this he starred in such films asÂ StonewallÂ andÂ Brother to Brother. What led him toÂ Child of the ’70s?

Vaccaro:Â Duane is an incredibly talented man, and I’ve wanted to work with him as an actor since the day we met. He plays a character modeled after “Lionel Jefferson” onÂ The Jeffersons, who was played by Michael Evans, who I had such a big crush on when I was a kid.

Edwards-Stout:Â Another familiar name in your cast is Natalie Toro, who starred on Broadway inLes Miserables, among other shows.

Vaccaro:Â Natalie and I have been best friends since the fourth grade! She is my family, my sister, and in the show she’s playing the role of Brenda, Carlo’s sister, who is a real Snooki type!

Edwards-Stout:Â You’re currently raising funds forÂ Child of the ’70sÂ throughÂ Indiegogo, and I love that for the highest-level donation, someone can not only be an Associate Producer on the series–

Moss:Â It’s an easy way to get some Hollywood credits!

Edwards-Stout:Â –But they also get a role on the show. Would they simply be Waiter #2, or would you write them a funny bit?

Vaccaro:Â No, I would definitely want to write something very cool for someone who helps us out in that way. I’d want it to be something really fun!

Edwards-Stout:Â Now, you are both out and proud gay men, so I’ve got to ask: Aside from the general ’70s theme and your very gay and gay-friendly cast, any other hot homo moments inÂ Child of the ’70s?

Moss:Â I cameo in the first episode as a co-worker of Carlo’s at a phone sex company. I don’t know if any of what I said will be heard onscreen, but if anyone can read lips, it’s very… well… it should get me a lot of dates.

Vaccaro:Â And, we do have someone incredibly hot playing Joe, the love interest, and if I have anything to say about it — which I do, as I’m the star, co-writer and producer — there will be lots of skin!

Moss:Â I imagine the real hot and heavy homo moments will occur in season two and beyond. We’ll do the reverse ofÂ Queer as FolkÂ by toningÂ upÂ the hot homo stuff as the series progresses.

Edwards-Stout:Â What plans do you have as for the character as the series goes forward?

Vaccaro:Â When Carlo changes his life and moves to Los Angeles, he’s a real fish out of water, and we get to explore L.A.’s very specific quirks. We have a terrific scene about his first car accident, and the very special ’70s guest star who he crashes into! We already have a group of amazing actors lined up, including Jonathan Slavin–

Vaccaro:Â –and Jonah Blechman, who was inÂ Another Gay Movie.

Edwards-Stout:Â OK, one last question for you lovers of the ’70s! Terrence, we’ll start with you. If you could be any character or real person from the 1970s, who would it be, and why?

Moss:Â –So I’ll say Clifton Curtis fromÂ That’s My Mama, because afros were out of style by the ’90s, and even if they came back in style, I can no longer grow enough hair to produce one.

Edwards-Stout:Â So, Michael, are you going with Rhoda?

Vaccaro:Â So many possibilities… I might choose Stockard Channing’s stewardess inÂ The Big Bus, so I could ride a nuclear-powered bus from New York City to Denver.

Edwards-Stout:Â I loved that movie!

Vaccaro:Â But my ultimate choice would have to be Esther Hoffman Howard, so I could fall in love and have sex with John Norman Howard. I mean, was there ever a sexier guy than Kris Kristofferson inÂ A Star Is Born?

* * * * *
For more information aboutÂ Child of the ’70s, please visitÂ the Indiegogo page.

One thought on “Bruce Vilanch To Appear In Michael Vaccaro’s Web Series, “Child of the ’70s””