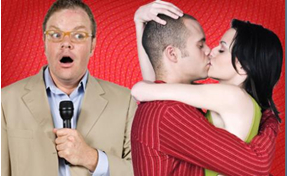 TICKETS: $15 at door. $12 in advance via www.thefixupshow.com

INFO: THE FIX-UP SHOW brings together a panel of three peopleâ€”two who know an eligible single well, and one celebrity who has never met the personâ€”and has them interrogate potential suitors to make a match. The matched pair wins a meal at Amalfi restaurant and goes on a real date! How did our panel do? Find out next week!

Itâ€™s â€œIâ€™ve Got A Secretâ€ meets â€œLove Connectionâ€ â€“live on the Los Angeles stage. A dating show with heart â€“spontaneity, hilarity, and civility are guaranteed. Old or young, gay or straight, all are given a chance to find love on THE FIX-UP SHOW.

WHO: Host/Producer J. Keith van Straaten hosted “What’s My Line? – Live on Stage,” and Comedy Central’s TV game show â€œBeat The Geeksâ€ and is often seen commenting on E! Entertainment Television. His essays on dating and Los Angeles have appeared in The Jewish Journal, Tango, and Backstage. More at www.jkeith.net.

Co-hostess Patti Goettlicher returns to â€œThe Fix-Up Showâ€ after appearing in the successful New York run. She also played hostess to J. Keith during the New York run of â€œWhat’s My Line? – Live On Stage.â€

Celebrity guests for this run will be announced shortly. Updated info available at www.thefixupshow.com.