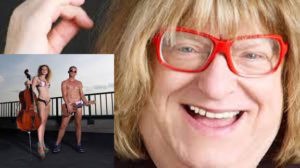 In Association with rj productions

Emmy Award-winner, celebrated comedy genius and Fire Island favorite, Bruce Vilanch, comes to Whyte Hall in August with musical comedy sensations The Skivvies. From writing The Oscars for over 25 years to The Hollywood Squares, Bruce has many stories to tell.

The Skivvies, the “musically thrilling” undie-rock, comedy-pop duo don’t just strip down their musical arrangements, they literally strip down to their underwear to perform their distinctive mashups and eccentric originals for cello and ukulele starring Award-winning singer-actors Lauren Molina (Broadway’s Sweeney Todd & Rock of Ages) and Nick Cearley (All Shook Up, Buyer and Cellar) The Wall Street Journal called them “smart, sophisticated…ingenious.”

TICKETS AVAILABLE IN THE HARBOR AND AT THE BOX OFFICE