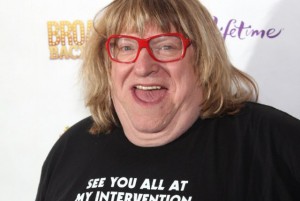 Bruce Vilanch, who was supposed to duet with Michael Urie but ended up coming onstage stag when Urie had to bow out for a pilot. “It’s for the Will & Grace producersâ€”he has the Grace part!” he joked. Instead Vilanch presented a generous endowment of $50K to Broadway Cares/Equity Fights AIDS from sponsor Lifetime (officially no longer just “Television for Women”, but for us gays too!), who supported the evening for the second year in a row. Vilanch got shaky-voiced and teary-eyed over the loss of that biggest and brightest AIDS fundraiser, Elizabeth Taylor.

Later we wondered why he had gotten so choked up? “We were friendlyâ€¦she got involved [in AIDS fundraising] in the very beginning and I began writing all the benefits. We did a lot of shows together and we gave a lot of people awardsâ€¦She was great fun. The thing that nobody knows about her was…she was all about family. She had five kids and 112 grandchildren and every weekend she would throw the house open. It was full of friends and family.”