â€˜I Got Paid a Lotâ€™
Comedian Bruce Vilanch on the Oscars, reality TV and his diet
By Ramin Setoodeh
Newsweek
Feb. 24, 2006 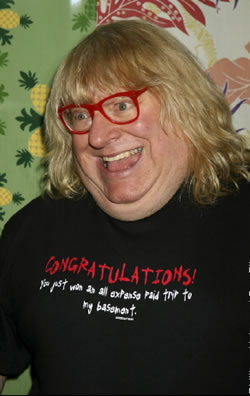 Feb. 24, 2006 – Bruce Vilanch is back writing again for this year’s Oscars ceremonyâ€”making it his 16th telecast. The comedian also launched a reality TV career on VH1’s “Celebrity Fit Club” (Sunday at 9 p.m.) He spoke to Newsweek’s Ramin Setoodeh about the upcoming awards show. Excerpts:

NEWSWEEK: How much of the Oscars are scripted?
Bruce Vilanch: Everything is scripted and it changes as we go along. The writers are in the wings with the host and they are watching the show as it progresses and adapting, rewriting, until the very last hunk of gold is dropped. The only truly unscripted parts are the winner. They dictate how the show will go. They’ll execute maneuvers you can use later on, they’ll get political, they’ll be wearing something. They’ll show up dressed up as a swan.

What else is going to be different with Jon Stewart?
Well, it’s Jon’s first time. I expect it will be political. He’ll probably use a couple elements from “The Daily Show.” But he doesn’t want to turn it into “The Daily Show.”

How many gay cowboy jokes have you written?
We’re up to 13,303. The thing is, when people see “Brokeback Mountain,” it’s hard to vote for anything else because it’s so moving and touching. That’s part of the problem with making jokes about it. The jokes are funny to people who haven’t seen the movie. And then when they see the movie, they know that’s not what the movie really is.

Will “Brokeback” win best picture?
I hope so. It’s one of the best movies ever. To me, “Crash” was like a bludgeon. It was like everybody was spouting, “Here’s what people are thinking about racism.” But I don’t think you can discount the fact that in the Academy, there are probably as many homophobic voters as there are in the world. I have a feeling there are people who won’t even see “Brokeback Mountain” because they’re not interested in that subject. I hope to be proven wrong. But if “Crash” wins, I suspect I’m right.

The finale of “Celebrity Fit Club” airs on Sunday. Who will win that?
It’s not revealed yet.

What would happen if you told me?
They’d come back and inject me with fat cells. I lost 25 pounds, through a dietâ€”a lot of zone foodâ€”and exercise and the nightmarish aspects of reality television. They’re after you the whole time. They have a scenario planned for you and you can either play into it or not. If not, they’re going to edit you to look like an uncooperative boor.