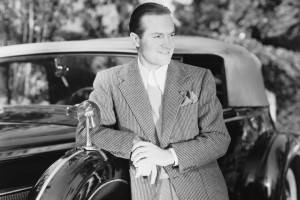 If you grew up watching the Bob Hope specials on NBC as I did, your image of the comedian is Mr. Southern California — a rich old Republican clad in a yellow V-neck sweater and swinging a golf club.

I met Hope once. It was 1984, and I was a page at the Republican National Convention in Dallas. The New York delegation was staying at the Stouffer Hotel and so, too, was Bob Hope, who was there to cheer on his old friend Ronald Reagan.

Hope was walking his dog through the lobby one morning. His outfit caught my attention. He was wearing a pink and powder-blue striped pantsuit. His little dog was wearing the exact same thing.

I asked him for his autograph, and he said, “Aren’t you a little young to be a Republican?”

Well, I thought it was hilarious.

I mention this little memory — thanks for the memory! — because I’m reading Richard Zoglin’s fine new biography of the comedian, “Hope” (Simon & Schuster).

I’ve just finished the early chapters, and what strikes me is how different the young Bob Hope was from the country-club Republican he became later in life.

The young Hope was a Broadway star who cut a dashing, somewhat caddish figure about town. He appeared in eight Broadway shows, including “Red, Hot and Blue” with Ethel Merman.

Here’s some gossip: Hope and Merman were apparently so hot for each other they’d hook up in dark doorways along Eighth Avenue on their way home from the theater.

Hope zipped around New York in a chauffeur-driven Pierce-Arrow. He lived in a swinging bachelor pad on Central Park West. He bought a Scottish terrier, which he used to pick up girls.

“He was .?.?. great bait,” Hope said. “When the girls went by they stopped and petted him. As a result, I did a nice business with those beauties.”

He never threw away a joke. In 1973, writer Bruce Vilanch worked with Hope on a TV show. The Arab oil embargo was in the news. Hope retrieved a tin box full of gas-rationing jokes from World War II.

“He dealt them out like a deck of cards,” Vilanch recalls. “ ‘Oh, that’s good,’ he’d say. ‘Nah, not that one.’ We repurposed — before there was such a word — the good ones for the oil crisis.”

At one point Hope had to leave. He told Vilanch: “Leave the jokes with the guard.”

As for the country-club Republican he later became — a figure of ridicule to baby boomers — Vilanch has this to say:

“Bob did one of the first AIDS public service announcements. I asked him personally, and he said yes right away. He did it with absolutely no qualms.”