Greg In HollyWood
Stage: Rip Taylorâ€™s surprisingly serious â€œIt Ainâ€™t All Confettiâ€ show gets a star-studded launch
By Greg Hernandez on May 24, 2010 1:44 pm 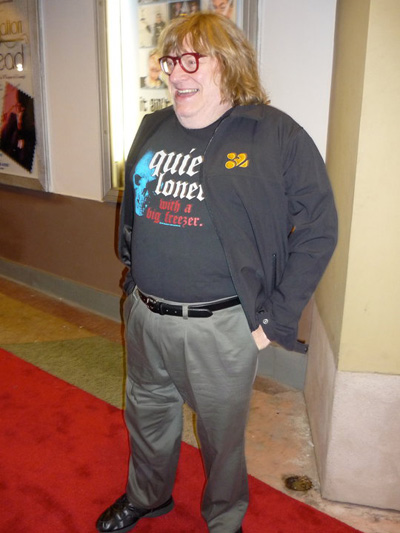 If you want laughs, you will get plenty watching Rip Taylorâ€™s one-man show It Ainâ€™t All Confetti at the El Portal Theatre in North Hollywood. But you will also be deeply moved by the monologues he delivers about his life and what performing in front of an audience means to him.

After tossing off dozens of silly jokes rapid-fire with confetti and various props in the mix, Rip literally rips off his toupee and gets real. He tells about a tough childhood which included being in foster care where he was molested and learning to make bullies laugh in school to escape their fists.

He tells of working in the U.S. Capitol as a congressional page before joining the Navy where, unexpectedly, he got his start in showbiz. From then on, the anecdotes flow. There were 20 appearances on The Ed Sullivan Show and nearly as many on The Jackie Gleason Show until â€œThe Great Oneâ€ flew into a rage because Rip casually touched him while they shared a laugh.

His shtick of ripping up index cards after a joke fails was born during what he thought was a bomb appearance on The Merv Griffin Show. Rip thought he was going over so badly that he began ripping up cards and throwing shoes then stormed off the set. He was invited back the next day by Merv and asked to be that crazy man again.

He hasnâ€™t stopped since.

Rip didnâ€™t talk at all about The $1.98 Beauty Show, thew syndicated show from the late 70s that I remember him so well for or his time as a regular on The Brady Bunch Variety Hour. Maybe thatâ€™s because he has so many other accomplishments including a three-time Entertainer of the Year winner in Las Vegas and serious acting roles in such films as Indecent Proposal where he played Demi Mooreâ€™s boss, unrecognizable in a dramatic role sans toupee.

The running theme of the show is how the spotlight was a cure-all for Rip and it is clear that it still is for this star now in his mid-70s. Iâ€™ve interviewed him on several red carpets and he has at times appeared a little shaky because of knee surgery. But as I watched him own the stage Friday, it was as if 25 years had melted away and he was still in his prime.

Ripâ€™s show is performed inside the El Portalâ€™s 99-seat Forum Theater so there is a real intimacy to the show which has already been extended through June 6. (click HERE for ticket info).

I talked to some of these folks before the show began and asked them what made this show a must-see:

Bruce Vilanch: â€œI loaned him my hair 20 years ago and Iâ€™ve come to collect it.â€

Susan Olsen: â€œI loved Rip [on the Brady Bunch Variety Hour), he was a sweetheart. He’s still a sweetheart. He contributed to our book Love to Love You Brady which was about the variety show. He was a doll.”

Jane Kean: “He’s one of my favorites., he’s just a natural funny man. He got a ticket for jay walking with my sister once, that makes us very close [laughs].â€

Fellow comedian Rich Little said he wouldnâ€™t want to share a marquee with Rip because: â€œI donâ€™t think Iâ€™d want to because no one would notice me.â€

Kathy Griffin didnâ€™t do press but she did sign autographs for a very aggressive group that also swarmed around Alex Trebek and Susan Olsen. Publicist Harlan Boll, who was handling PR for the event, had profanities and slurs shouted at him by some of the autograph hounds and the police had to be called. Thankfully, most of the audience was already inside the theater and blissfully unaware of the ugliness going on outside.