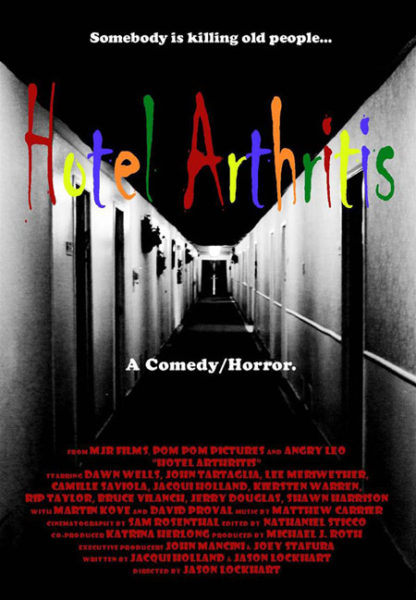 Not sinceÂ Bubba Ho-TepÂ has horror graced the halls of a retirement communityâ€¦unless you count that one episode in the first season of “The Walking Dead.” But filmmaker Jason Lockhart is about to bring us another old folks home nightmare withÂ Hotel Arthritis.

Synopsis
Senior citizens are being offed by a masked killer who stalks the halls of the small retirement community in which they live. The story opens with a terrifying murder, creating space on the waiting list for Rose to move in. Upon Rose’s arrival, she is taken on a tour of the grounds by the quirky, offbeat manager of the joint: Dale. The odd and brightly colored characters continue to pop up as Fanny, her Jewish gossiping neighbor, introduces Rose to “The Gang.” The routine of daily life is all stirred up at the moment. People are disappearing, there’s talk of a ghost, and to top things off, there’s an STD outbreak. As terror rises throughout the building, the fear of who’s next and who the killer may be, continues to grow. We find ourselves in a game of “Who-done-it?” Is it Desperella, the ground’s custodial manager? Is it Kitty, the sexy activities director? Or Zeke, her punk rock boyfriend? Maybe it’s one of the elder folks suffering from dementia or seeking some sort of revenge. Full of laughs and full of scares, you’ll be on the edge of your seats from the moment you enter the world of the Lake View Retirement Home: The place where people come to live… until they die!