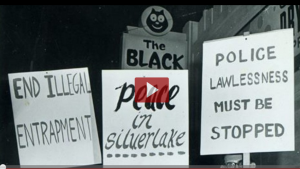 When a rally tonight in Los Angeles honors the Black Cat protest — which preceded Stonewall by two years — it will be a reminder to President Trump and his administration that protest works.

“You put a microphone in front of me, I’m going to talk about Trump,” said Mitch O’Farrell, the Los Angeles city councilman who is helping organize the rally, which begins at 8 p.m. outside the Black Cat Tavern.

O’Farrell says the Trump administration’s anti-equality agenda is backfiring. “Their authoritarian and anti-constitutional executive orders are galvanizing other historically oppressed communities into greater solidarity,” he said. Trump is giving Americans “an opportunity for us to be more enlightened and stand in stronger solidarity.”

The Black Cat protest in 1967 was itself a turning point triggered by authority. Undercover officers had gone on New Year’s Eve to the tavern in the Silver Lake neighborhood of Los Angeles and waited until the clock struck midnight, when partygoers would kiss. It was illegal to kiss a person of the same sex. As partners embraced, the officers took out their badges and started violently making arrests.

The queer community was fed up with regular police brutality and took what was a highly unusual step: they organized a protest on February 11, 1967.

The founders of that protest would also create a group — Personal Rights in Defense and Education, or PRIDE — and that group created a newsletter called The Advocate. That newsletter became the magazine you’re reading now.

A lot has changed in 50 years. At tonight’s rally, for example, police are taking part in commemorating history. But LGBT Americans also have to contend with President Trump, whose policies are met repeatedly with protests. The Women’s March the day after Trump’s inauguration included millions of people across multiple cities all over the world. Protests broke out the next weekend at airports when Trump signed an executive order that implemented his Muslim ban at the border. Last weekend, a queer solidarity rally was held outside the Stonewall Inn in New York City after Trump threatened to sign a “religious freedom” order, which would make it optional for federal workers to recognize same-sex marriages so long as they cite a religion that says it’s immoral.

This weekend, as Los Angeles marks history, it will also be speaking directly to Trump and the likes of attorney general Jeff Sessions. Late Friday night, Sessions’ Justice Department filed a legal brief that effectively ends the Obama administration’s protections for transgender students. They had been guaranteed, for example, the right to use bathrooms and other facilities that match their gender identity.

“It just underscores the power of the U.S. Constitution and how we always lean towards advancements,” he said. “One misguided president being in office can not and will not reverse all of that progress. Understandably, there is a lot of anxiety fear and chaos created by what he’s doing, but we will prevail over all of that and we have the Constitution, and we have our level of sophisticated activism. The LGBT community knows how to effect change and that is one of our great strengths.”

Other speakers scheduled to be at the Black Cat rally tonight include Los Angeles Mayor Eric Garcetti, the cast of Queer as Folk, actors Wilson Cruz, Guillermo Díaz and Darryl Stevens, plus comedians Alec Mapa and Bruce Vilanch, executive director of Equality California Rick Zbur, and editor in chief of The Advocate, Lucas Grindley.