Business Insider
Bruce Vilanch shares what it’s really like to write jokes for the most prestigious awards show
February 29, 2016 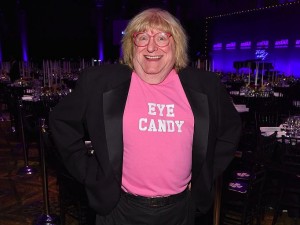 But much of what happens behind the curtain — the elements we don’t see, like the writing — makes the award show the prestigious and memorable event it is each year.

Comedy writer and six-time Emmy award-winner Bruce Vilanch, 67, has written jokes for the Oscars since 1989 and served as head writer for the show from 2000 to 2014.

In the book, “Poking a Dead Frog: Conversations with Today’s Top Comedy Writers,” he talks about this huge responsibility.

“Out of the hundreds [of jokes] that we write — really, hundreds — if one or two are used, it’s a big deal,” he told the books author Mike Sacks.

Vilanch told Sacks that some of the writing team’s best jokes are ones made up on the spot in the wings during the live show. But, he explains, the writers actually start coming up with jokes for the Oscars about two months in advance and keep them in a 300-page “playbook.”

This huge outline is kept just off stage so the host can flip through it during commercial breaks to refresh their memory.

The idea to make this mega-outline each year came from Billy Crystal, who has hosted the show nine times and wanted to help out future hosts with the burden that comes from having to recall so many lines and so much information.

The playbook contains a complete rundown of the show, which typically lasts between three and four hours, as well as numerous jokes. Out of the hundreds of jokes the writers come up with ahead of time, Vilanch says it’s a big deal if one or two are actually used in the show.

Vilanch says the writers are aware that certain celebrities are off limits to joke about, either because the situation is too embarrassing for them, the joke would be too cruel, they will be in the audience.

“You have to be careful to not cross the weird line,” he told Sacks.

Vilanch remembers a joke from the 2003 Oscars in which host Steve Martin would have said, “I have good news and bad news. The bad news is that my fly was open throughout the monologue. The good news is that the camera puts on ten pounds.”

Vilanch, his team, and even the network censor thought the joke was hilarious, but Martin didn’t feel comfortable delivering it at such a classy event.

Vilanch understood Martin’s dilemma though, because a joke at the Oscars will stick with you throughout your career.

“The choice you have to make is, do I, as a comedian, want to be remembered for this joke or not?” he told Sacks.