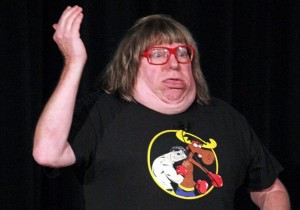 Bruce Vilanch returned to his alma mater Sunday and told behind-the-scenes stories of being a writer in Hollywood, divulging tales from his stints of writing for pageants and for award shows such as the Oscars. He didn’t veer from leaving out the dirty details either, mentioning award shows where dresses were ripped backstage, and a time when a Saint Bernard was brought on stage and relieved itself at the feet of Dolly Parton.

“I’m really glad you all showed up,” Vilanch said. “Because as you know, I have no act. I write everybody else’s act.”
Vilanch is a comedy writer, actor and OSU alumnus. He also is a six-time Emmy Award winner. His comedy for the evening focused on the stars he’s worked with through his career.

Vilanch seems to take pride in the shows that have flopped throughout his career being that he didn’t veer from gushing about their misfortunes. “The Star Wars Holiday Special” aired in 1978 and was one of the first official “Star Wars” spin-offs ever. Vilanch took part in writing the special, which starred actors and actresses such as Harrison Ford, Carrie Fisher and Bea Arthur.

“I sat down with George Lucas and he told me about this extra story that he had written about the Wookies,” he said. A Wookie is a furry creature from “Star Wars.” Han Solo’s sidekick in the show, Chewbacca, is a Wookie. The storyline of “The Star Wars Holiday Special” follows Chewbacca’s family while he was out defending the universe.

“The show was only broadcast once in its entirety but has become infamous for its negative reception,” Vilanch said.
Vilanch also told the audience that to get his foot in the door in Hollywood, he first had to grow his reputation by writing for shows in a smaller circuit. He opted to write for pageants and beauty queens.

Vilanch also gave insight on how beauty queens master the technique of a pageant wave.

“It goes … light bulb, light bulb, pearls, and they would repeat that over and over for hours,” he said.

Vilanch did the pageant wave for the audience. The “light bulb” motion is taking one hand and twisting it as if turning a light bulb from a socket. The motion is repeated with the other hand and then the person would touch her chest lightly as if touching a string of pearls around her neck.

Another part of his career involved writing for award shows such as the Oscars and Emmys.

“I write a lot of those award shows that you all watch but won’t admit to because it’s a guilty pleasure,” he said. “I’ve written for so many of them that I’ve finally worked down the entire list of award shows and (am) moving on to really obscure ones.”

Massey Pierce, a third-year in speech and hearing sciences, has seen Vilanch on TV and went to the event to hear his stand-up.

“I like comedians, I’ve seen him on TV all the time and I wanted to see what his stand-up was like,” Pierce said. “I thought he was really funny.”

Lina Al-Khatib, a third-year in English, came to the show to learn more about Vilanch and the Oscars.

“I didn’t know who he was exactly, but my friend told me he wrote for the Oscars and I am a huge Oscars fan, so I wanted to hear some stories of behind-the-scenes,” she said. “The Dolly Parton story was hilarious.”

Vilanch also touched on a few things that have changed at OSU since his tenure at the university, but to his surprise, one thing stayed the same. Vilanch said he was happy “Hang on Sloopy” stood the test of time and is still one of the most-played songs on campus.

“When I was in school, ‘Hang on Sloopy’ was the No. 1 song on the radio and it was the first rock ‘n’ roll song that the (OSU) Marching Band adopted,” Vilanch said. “I’m glad to see it is still around and is still a favorite for everyone.”