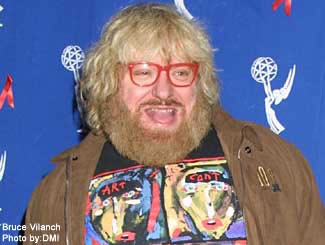 BRUCE VILANCH is getting rave re views for his role in the road show of “Hairspray,” as the mountainous Edna Turnblad. The show opened in L.A. last week to a screamingly enthusiastic audience. Vilanch was raucous and tender, and Hollywood bigwigs who attended loved Bruce’s impromptu political puns concerning Gov. Arnold Schwarzenegger, Whoopi Goldberg and Linda Rondstadt. Tony-winner Marissa Jaret Winokur reprised the role that made her a Broadway baby.

Best news of all is that Vilanch will bring his Edna to New York in October, and coming with him will be ’80s sitcom star Jim J. Bullock, who will play four roles — the sponsor of the Corny Collins Show, the teacher, the jailer and Mr. Pinky, the dress shop owner. It’s about time the talented Bullock got back on track.

Now, Bruce is a legendary kidder. He loves a good joke and juicy gossip. So let’s take this in that spirit. Bruce insists that John Waters, wants — are you ready? — Oscar-winner Anthony Hopkins to play Edna in the movie version of “Hairspray!!!” Vilanch, with his tongue perhaps wedged neatly into his chubby cheek said, “I, of course would love to play Edna in the movie, but Harvey Fierstein is up there at the top of the list. It’s too bad Marlon Brando died as he would be perfect, but John Waters has his heart set on Anthony Hopkins.”

Ahhhh . . . I say don’t dress to see Sir Anthony Hopkins dressed up in drag, but as this is showbiz, never say never.