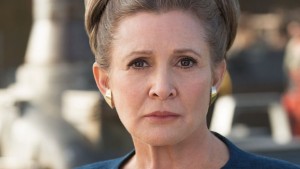 While Carrie Fisher is best known for her work in front of the camera, she was also a celebrated writer of books and films. The late Star Wars actress and icon, who died at age 60 on Dec. 27 after a heart attack, was even responsible for writing a few key funny one-liners for Oscar hosts and accidentally covering them in glitter.

According to veteran comedian and comedy writer Bruce Vilanch, who hired Fisher to be a part of his Oscar writing teams, she had several great ideas that were too good to air, like Princess Leia singing a Joni Mitchell song in the infamous Star Wars Holiday Special and Whoopi Goldberg getting a massage onstage at the Academy Awards. Vilanch recently shared with PEOPLE three of his favorite memories from working with Fisher, here they are in his own words:

“In 1978, I was one of the writers of the Star Wars Holiday Special, a show that would give FDR a challenge on his ‘day of infamy’ remark. Carrie, Harrison [Ford], Mark [Hamill] and several of the more presentable robots were ordered to sing a song about Life Day, the holiday we were ostensibly celebrating in the galaxy far, far away. Nobody wanted to do this and Carrie thought she would save them all the trouble by doing, as a solo, Joni Mitchell’s Christmas ditty, ‘River,’ [with the lyric] ‘I wish I had a river I could skate away on.’ It was 1978 and there were a whole lot of chemical additives being consumed by many of us, so we thought it was a great idea. Princess Leia on skates, kind of like what Disney on Ice is probably doing right about now, since they own her ass. Everybody loved it except Joni Mitchell. Carrie quickly lost interest and we moved on to the next shiny object.

“Along those lines, about 20 years later, I brought Carrie onto the Oscar show writing team. Whoopi [Goldberg] was hosting and we were trying to figure out funny things for her to do. Enya had written a song that was nominated, and it was a typical Enya song, the kind that someone noted you only hear when you’re getting a massage. So we thought it would be funny if, after about 16 bars, a little curtain was raised on one side of the stage and there would be Whoopi, getting a massage. There were some very funny people on the staff that year, Carol Leifer (Seinfeld), Jonathan Tolins (Grease Live!), Jon Macks (The Tonight Show with Jay Leno), Dave Boone (The Tony Awards) — but it was Carrie who ran with the idea, turning it into a kind of Rockettes massage-table number, huge and elaborate. Everybody loved it except Enya. You never saw it.

“A few years later, Carrie was back on the team. On the night of the show, she arrived in a black tux pantsuit, her hair and shoulders festooned with gold glitter. I had assigned her to the green room, where people wait before they go on the air, because everybody knew her and she was a reassuring presence to a lot of actors who didn’t have a character to play that night. Of course, she hugged them all. After we’d been on the air about 20 minutes, the director called me, shrieking, ‘Tell her to stop hugging people! This looks like the god—- Tinker Bell special! Everybody’s covered in glitter!’ “