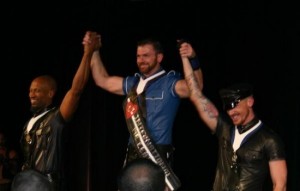 Over 2,000 leather enthusiasts packed the Grand Ballroom of the Hyatt Regency Chicago for Sunday’s competition. The opening featured a performance of “The Masochism Tango” by Sharon McNight.

Founder and Executive Producer Chuck Renslow welcomed the crowd, followed by a moving video tribute to Roger “RJ” Chaffin, a past coordinator of IML who passed away suddenly last June at the age of 59.

The evening also included a speech from Rick Storer of Chicago’s Leather Archives and Museum, a special guest appearance by Bruce Vilanch and a number of performances by McNight, who received a standing ovation.

Woodruff bested a field of 20 finalists, from across the U.S. and around the world. Participants were judged on stage presence and personality (Pecs and Personality), leather image, presentation skills, and physical appearance.

Nick Elliot from Portland, OR was named International Mr. Bootblack 2012. Boy Dave of Charlotte, NC was named Second runner-up and Bootblack Mike from Minneapolis, MN was First runner up in the Bootblack competition.

IML began in 1979 when about 400 gay leathermen gathered in Chicago. Today thousands gather in the Windy City over Memorial Day Weekend for what has become an annual tradition for the leather community.