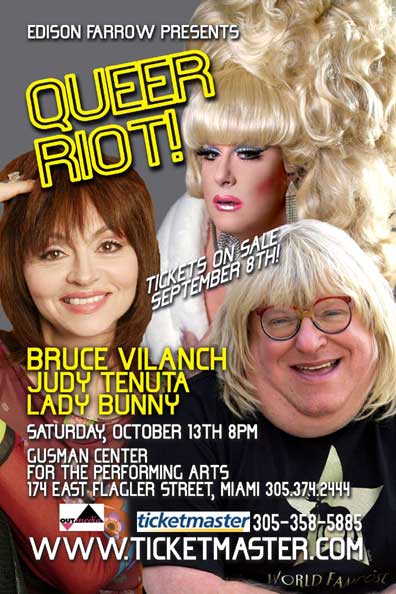 “Queer Riot!” at the Gusman Center for the Performing Arts

On Saturday October 13th at 8pm, Edison Farrow presents “Queer Riot!” – a night of outrageous comedy starring Bruce Vilanch, Judy Tenuta and Lady Bunny. Tickets will go on sale Saturday, September 8th at 10am on Ticketmaster.com. There will also be a Pre-Sale for for SoBeSocialClub.com email subscribers on Wednesday, August 29th at 10am with a password to be emailed to the mailing list.

Bruce Vilanch is of the most sought-after jokesmiths in the entertainment industry, Bruce Vilanch has become a recognizable face in his own right, thanks to the feature-length documentary “Get Bruce!” (1999) and his one-time stint as a regular on “Hollywood Squares” for which he also served as head writer.

In Los Angeles he wrote for variety shows like the original “Donny and Marie” and “The Brady Bunch Hour” and provided material for Richard Pryor, Lily Tomlin and Joan Rivers. He has maintained his connection with Midler through the years, working on such projects as the feature “Divine Madness” and the TV special “Bette Midler – Diva Las Vegas”, as well as writing for her short-lived but lively sitcom, “Bette!”.

Vilanch began contributing to Academy Awards telecasts in 1989, collaborating with the likes of Billy Crystal, Whoopi Goldberg and David Letterman, and graduated to head writer in 2000. He has roasted celebrities like Elizabeth Taylor and President Clinton. The Whoopi connection led to his providing the notorious material Ted Danson performed in blackface at a certain 1993 Friars Club roast of his then-girlfriend Goldberg, but his resume also includes “You Made Me Watch You”, the touching Emmy-winning valedictory Midler crooned as a send-off to Johnny Carson.

He scripted most of the Academy Awards telecasts over the last decade, two of which won Emmys, including the one featuring Billy Crystal’s Hannibal Lecter entrance. Mr. Vilanch has also written for The Tony’s, The Grammy’s, The Emmy’s, and just about every other award show to brighten your television screen. He also participates and volunteers at almost every charity function, especially those dealing with GLBT issues.

Judy Tenuta is the most famous person that ever lived. If you don’t believe it just ask her! The stand-up comic/actress who describes herself as a “multi-media Bondage Goddess” and “the Aphrodite of the Accordion”, is actually a caring nurturer who wakes up at 8PM to verbally abuse countless herds of mortal swine (her audience) and converts them to her signature religion “Judyism”. Her fans ranging from fetuses to fossils, gays to geishas, all beg to chew her gum and kiss her feet because she is the only fun-feminist who preaches that all women should be worshipped as “Love Goddesses”, and all men have an equal opportunity to become her furniture. It could happen! Judy has starred in her own HBO, Showtime, and Lifetime Specials and has been seen on every major talk show. Most recently she was a special correspondent for “American Journal”, and “Entertainment Tonight,”where she conducted interviews with such celebrated public figures as Donald Trump and Reverend Jesse Jackson. Judy has also had two smash comedy CD’s and has been nominated twice for Grammy Awards for her “Attention Butt-Pirates and Lesbetarians”, and “In Goddess We Trust”. She is also the author of “The Power of Judyism” (Harper-Collins).

Lady Bunny with glitzy outfits, sky-high wigs, and false eyelashes long enough to embarrass even Tammy Faye Bakker, this multi-talented drag artiste would turn heads even if looking glamorous was his only talent. But this isn’t just another man in a dress. Lady Bunny is a successful comedienne, emcee, singer, songwriter, actress, DJ, and, most famously, the founder, organizer, and hostess of Wigstock, the outrageous festival of drag and music that had been delighting over 40,000 New Yorkers and tourists visiting New York for the event, every Labor Day for over 20 years. The feature film, Wigstock, The Movie, which chronicled the event from preparation to performance day, was produced specifically about this popular event and Lady Bunny, and has just recently been re-released on DVD.

Bunny tours constantly, bringing down the house from Cincinnati to Tel Aviv with her bawdy, Dusty Springfield-meets-Don-Rickles mix of potty-mouthed humor, Southern charm, zany “Laugh-In”-style skits, and X-rated pop song parodies. Bunny has emceed events around the world ranging from Van Cleef Arpels corporate parties to Gay Pride Parades and has shared the stage with the likes of Pamela Anderson, Margaret Cho, Dennis Rodman, Cyndi Lauper, k.d. Lang, and the B-52’s, just to name a few.

As a journalist, Bunny keeps a high profile with her weekly “Star Style Report” for Star Magazine. Bunny also writes regularly for various other publications such as Visionaire, Paper, Instinct, Genre, V, Interview and Time Out New York. Frequent TV and Film appearances also bring Bunny’s name to the worldwide masses. As a talking head for TV networks like E! and VH1 and with appearances on Comedy Central’s “Pam Anderson Roast,” HBO’s “Sex and the City”; Britney Spears’ MTV special “In the Zone & Up All Night,” as well as feature films such as Not Another Gay Movie 2, Dragtime, Party Girl, and To Wong Foo, Thanks for Everything! Julie Newmar, Lady Bunny is no stranger to the various demographic pools. Bunny’s even been consistently mentioned on the international hit show “Will & Grace,” cementing her status as an icon.