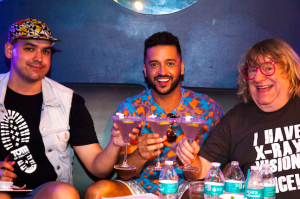 For Key West, the competition has become an annual favorite, drawing in visitors from all over for Key West Pride weekend. A local pillar of the LGBT community and visitors for nearly 40 years, the queer-friendly Key West Business Guild welcomed Stoli with open arms.

“Having the Stoli Key West Cocktail Classic attached to our Pride gives us the opportunity to have some very fabulous people come and visit,” said Matt Hon, executive director of the Business Guild. “Having these bartenders who are traveling in from 15 different cities that have never been to Key West before, they’re having their first experience here and finding out how fabulous and gay Key West really is.”

The weekend kicked off with a sunset cruise under a light drizzle of rain. It wasn’t enough to ruin the party though as contestants, friends, and Key West locals filled the deck, dancing with cocktails in hand. It was an intimate mixer that quickly built long distance friendships bound to last for years.

The next day, the competition began at 801 Bourbon Bar where I sat alongside fellow judges, Bruce Vilanch and Jai Rodriguez. The first six contestants took turns winning over the crowd with their high octane personalities and strong but tasty drinks. Next, we made our way a block down to Aqua where six more competitors whipped up their best Stoli concoctions. Nine drinks into my shift as guest judge, I was sure I was about to pass out in Jai’s lap (there are worst places to end up blackout drunk).

With 12 master mixologists narrowed down to six, they progressed to the finals alongside the three fan favorite contestants who won immunity from the preliminaries. In front of a massive audience of Key West Pride goers, they took to an outdoor stage right in the middle of Duval Street and in front of Bourbon Street Pub.

As they pulled out all the stops to impress judges, Bruce Vilanch, Latoya London, Stuart Milk, and local drag superstar, Sushi, the bartenders were critiqued on personality, concept, cocktail appearance, taste, and their overall knowledge of Stoli and Key West.

The competition was followed by performances from Jai and Latoya, which included covers of Nick Jonas and Barbra Streisand as well as some original music. As the tension built, we patiently waited to hear the winners of the third annual Stoli Key West Cocktail Classic.

Crowned in first place for his concoction, the Key West Kitty Kat, Rocky Collins AKA “the last top of Dallas” received the partygoers’ approval (below). Tying for second were Carly Morrison of San Francisco and Thuy Nguyen of Atlanta. Coming in third place, Flawless Shade from Portland, Oregon, was the competition’s first drag competitor.

Earlier in the weekend, Stoli’s National LGBT ambassador, Patrik Gallineaux, gave Out some insight into the significance of the competition:

“It’s all about giving back while having fun and celebrating the unique heritage of bartenders throughout history. I had to drive two hours as a kid to go to my nearest gay bar. That was the first time I ever felt happy and accepted, and for me, the gay bar was a community center. And the bartenders were so stellar. They made me feel safe and accepted.”
Gallineaux’s experience is similar to many. Just that night, the point was made very clear when tragedy struck Orlando. Four hours south at the exact same time, we were drinking and enjoying each other’s company much like those at Pulse were doing.

The next morning, there was an unmistakable heaviness in the air. It felt wrong to wake up and celebrate Pride on a day like that day, but days like that day made Pride so important. We continued with the day’s events as planned but when we hugged our old friends and new acquaintances, we lingered just a bit longer. Instead of just drinking in decadence and debauchery, we were very aware of what we were celebrating.

A Pride Parade of local establishments and the Stoli family marched down Duval Street behind a banner that read “Key West Stands with Orlando.” Afterward, we made our way to La Te Da, a locale where Gallineaux presented two checks to Collins for charities of his choice. (Collins chose the Design Industries Foundation Fighting AIDS, in Dallas, and Wesley House in Key West.)

Then, we marched to the Atlantic Ocean in silence to honor those who had lost their lives earlier that morning. As we reached the pier, Stuart Milk of the Harvey Milk Foundation stepped to the front to say a few words. I tried to get through the crowd to hear him but the pier was covered in people. I took off my shoes and walked through the water, watching over the side through people’s legs to see this great activist address my community.

With wet sand between my toes, I looked around at my brothers and sisters. All were sharing the same grief. Strangers hugged each other and cried together. It was the first time I’d seen my generation truly come together to support each other.