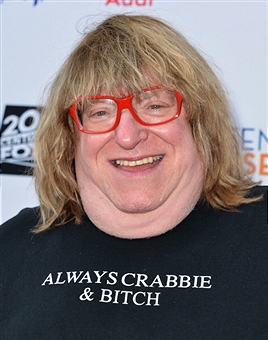 From on stage at “Backstage at the Geffen,” the annual gala for the Geffen Playhouse in Westwood, hostÂ Jane LynchÂ ofÂ “Glee”Â said she had participated in the theater’s previous fundraisers, alongside such stars asÂ Annette Bening,Â Alfre Woodard,Â Julie AndrewsÂ and others. “But now I’m the clearly most famous person in the room,” Lynch said, sliding into the personality of her “Glee” alter-ego, Sue Sylvester.

In truth, the Geffen had quite a lineup of A-list stars for Monday’s event, which broke the theater’s fundraising record by raking in $1 million from silent auction sales, sponsorships and tickets, which sold for $350 and up.

“This next guy, I can’t believe I have to introduce him,” said Lynch of Morrison, herÂ “Glee”Â costar.Â  Calling him, “the man I love to torment,” Lynch said sheâ€™d been “carrying” him on the show “for what seems like 100 years.”

Morrison, who came to “Glee” with strong Broadway credentials, sang two numbers from his upcoming album: “Come Rain or Come Shine” and “The Lady is a Tramp.” He was joined onstage by his girlfriend, Renee Puente, for a dance routine, and by Brad Ellis, the piano man on “Glee.”

In their talks, Mirren spoke of onstage nervous breakdowns; Mantegna of his introduction to theater inÂ Cicero, Ill., whereÂ Al CaponeÂ is its most famous citizen; and Vilanch of issues with divas at the Oscars. Both before and during the show, people talked ofÂ Gil Cates, the theater’s founder and former director, who died in October.

“Whenever he was in a room, the lights were just brighter,” said Jim Gianopulos, at a pre-event dinner for patrons at the Backyard Restaurant at the W Los Angeles in Westwood. Gianopulos is co-chairman and CEO of Fox Filmed Entertainment.

At the close of the evening, Gianopulos received the theater’s Distinction in Service Award, while stage, screen and television starÂ Carol BurnettÂ was honored with the Distinction in Theater Award.

Matthew Morrison — from Broadway to “Glee”