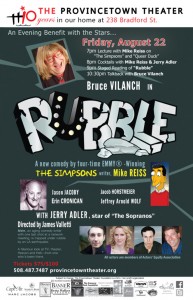 In Mike Reiss’s comedy, Rubble, Alvin, an aging comedy writer with one last shot at a network meeting, is trapped under rubble by an LA earthquake.

It’s a strange enough idea for a play, something Samuel Beckett might have dreamed up between his tramps waiting for Godot and Krapp recording his last tape. It becomes surreal, at least it will when it is performed in a benefit for the Provincetown Theater this weekend, when Alvin is played by none other than comedy writing legend Bruce Vilanch.

“It’s a crazy idea for a play: It’s Becket meets Book of Mormon meets The Simpsons,” said the show’s director, James Valletti. “It’s a really dark and funny look at the entertainment industry from two people who know it all – the good and the bad – really well. Mike has been a writer on The Simpsons from the very first episode and is still there today and Bruce has written comedy for everything from The Oscars to his own cabaret act. They’ve lived it, so they’re perfect for making the show come alive – even from under a pile of rubble.”

Those coming to the show to see Vilanch share Hollywood stories and gossip like he does in his cabaret act (which he will be performing at the Post Office Café on Commercial St. from August 22 – August 24) will find a very different character trapped under the trash at the theater benefit. “I approach Alvin like I would any acting part,” Vilanch said in an interview with Color Magazine. “When I write comedy for somebody else, I have to write it in their voice. Material I write for Whoopi won’t work for Billy Crystal, mainly because he’s not a black woman. The same applies to playing an acting role. I can’t be Bruce Vilanch in the show; I worked with the writer and the director to create the character of Alvin.”

Still, both Vilanch and Valletti admit there were times during the rehearsal process when the actor and the character were not as distinct as they imagined. “There’s a great line in the play…Alvin is trapped under all this rubble and has no idea how, or if, he will get out, and he’s musing about the size of cupcakes and how they’ve gotten smaller yet more expensive. It’s delightfully absurd to hear, especially when Bruce says it.”

“I do love that line,” Vilanch admitted. “There are many of the lines in the show that I love. The mix of a man in such an absurd situation thinking of such mundane things is just very, very funny.”