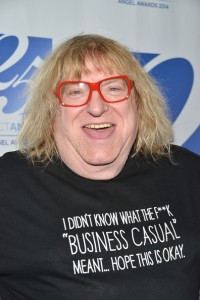 The July 19 event at Golden Gate Park saw about 20,000 participants raise $2.27 million for Project Inform, the lead nonprofit, and 42 other Bay Area agencies. The total is slightly larger than last year’s $2.24 million. (Last year, Project Inform said that $2.3 million was raised, but Executive Director Dana Van Gorder said a mistake was made in the 2014 projection.)

Under sunny skies last Sunday, walkers and others were upbeat during the opening ceremonies.

“We’ve taken major steps as a community, and in this country. We’ve achieved marriage equality, the Confederate flag has come down in South Carolina, the trans community will be able to serve in our military, and the Supreme Court has ruled that health care is a fundamental right,” declared an energetic Van Gorder from the podium in Golden Gate Park’s Sharon Meadow, referring to recent U.S. Supreme Court victories on marriage and health care, and recent news that top Defense Department brass are working on a plan to allow transgender people to serve openly in the military.

“The idea of that should give us the courage to continue the fight against HIV/AIDS,” Van Gorder added.

The tone of the day was similar to that of an upbeat church revival, blended with the swagger of a neighborhood block party, a celebration of justice, community, and progress, all while serving as an urgent reminder of the need for diligence in a fight that a community is determined to conquer.

The event began with a crowd that filled most of the seats and lawn area of the meadow by 10 a.m., and there was never a dull moment as Culture Shock, a popular Oakland-based dance troupe, opened the ceremony, followed by a rousing gospel number from another Oakland-based group, The Messengers of Hope. The gospel choir was created and led by Ernest Larkins, 44, who’s lived with HIV for over 25 years. Larkins created the group, not only to sing songs of hope, but to challenge the views and stigma of HIV in the black church.

“There is a lot of work to be done, and music is how we push the message of hope in the community,” he said.

Emmy Award-winning writer and comedian Bruce Vilanch served as emcee for the ceremony, helping to keep an already energetic crowd in good humor, praising the work of Project Inform and the steps being taken to further encourage safe-sex practices.

“It’s great that we have options like PrEP now, we take those around my house like Flintstones vitamins,” Vilanch quipped, referring to pre-exposure prophylaxis that studies show can prevent HIV if taken as prescribed.

While embracing the lighthearted references toward the new drug, Jen Dowd, a retail services manager at UCSF who has been participating in the AIDS walk for 14 of the 15 years that she’s been there, feels that public enlightenment around sexual health options is mandatory, and needs to continue in order to make a difference. Her motivation to attend AIDS walks, fundraise, and advocate for treatment options was fueled by an AIDS-related death of a close friend who was an event coordinator in 2006.

“If I can eliminate the amount of suffering of someone living with AIDS, I do what I need to do,” Dowd said.

The attendees, varying in age, ethnicity, sexual orientation, and walk experience remained in good spirits throughout the six-mile trek. Afterwards they were treated to music from local bands and even an underwear show by Stag Condoms models, which work to make condom use look and feel sexy.

As the walk portion of the afternoon came to an end, participants were greeted at the finish line with more celebrating as AIDS Walk organizers announced the grand total raised. In a post-walk email, Van Gorder said that the fee paid to MZA, which produces the event, was $162,500, a decrease from a couple years ago.