Mister D: Yes, I missed this one, but wanted to get up in the news section for posterity. Sorry I was late. Don 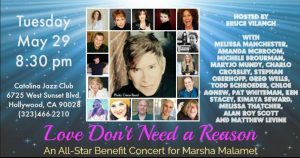 “Love Don’t Need a Reason: A Benefit for Marsha Malamet” on Tuesday, May 29th at Catalina’s Jazz Club.

This special show will showcase an array of performances, video and written testimonials and comments on the Life and Music of Marsha Malamet.

Explanation: This benefit is to help pay for all medical needs and some living expenses, due to the fact that what Marsha suffers from (we still don’t know exactly) is not covered by insurance. Whether it is an autoimmune disorder, or a metabolic disease, treatments are expensive. In 2015 she was diagnosed with early stage Parkinson’s, then a year later, Lyme Disease. She has spent a lot of money to see different doctors, who’s treatments have not been successful.

Now she is under the care of a new doctor who treated Kris Kristofferson successfully who was challenged by something similar. Right now, she has a 24/7 caregiver, and is mostly disable, using a wheelchair and walker.

The unfortunate thing is that she lost the muscle strength and coordination, and can’t play the piano, sing, or write. The performers honoring Marsha with their appearance are all friends of her’s, having known her or written with her.

Malamet Biography: At the age of 21, Marsha made her solo recording debut, “Coney Island Winter,” on Decca Records. It was engineered by Brooks Arthur. She performed at top venues in New York supporting the CD, including Lincoln Center, and her songs have been featured on Broadway: first, in Peter Allen’s “Up in One,” and then “The Boy from Oz,” based on Peter’s life.

Marsha’s songs have been recorded by the best in the business, artists include Barbra Streisand, Faith Hill, Luther Vandross, Diana Ross, Chaka Khan, Patti LaBelle, Meatloaf, the late Barbara Cook, Judy Collins and Sheena Easton. Marsha’s top ten international hit single, “I Am Blessed,” sung by the UK’s pop group, Eternal, moved the Pope to invite them to perform the song at the Vatican.

Her song “Love Don’t Need A Reason,” co-written with the late Peter Allen and Michael Callen, has become an iconic theme for the Aids/HIV epidemic, recorded by over 35 performers and gay choruses worldwide.

Marsha was Grammy nominated for her songwriting involvement on the original Broadway cast CD “The Boy from Oz,” starring Hugh Jackman.

For interviews and other information, please email Ralph at: Lampkinmusic@gmail.com