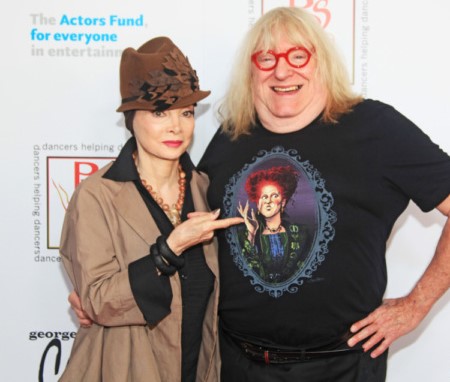 It is a deep, passionate, all-encompassing love amongst it’s members. And that is what I was feeling, attending a most prestigious (in my opinion) Event; The Professional Dancer’s Society 2018 Annual Luncheon & “Gypsy” Award Ceremony, held in the International Room at the Beverly Hilton.

It starts with the Dancers, Choreographers, Dance Divas from all mediums showing up in a corner of the lobby; all of whom have pre-paid to attend, with all money raised being given to The Actor’s Fund and Dancers in need; in a bevy of energy and mutual admiration of others gathering.

The ambience cannot be described. Put some wild-and-crazy dancers together, covering decades of working together and weathering brutal rehearsals, live performances, injuries, touring, and surviving in a very competitive business and you end up having a love-in. We are a unique family of misfits and artistic, diverse and creative souls.

Our President, Mitzi Gaynor, BWW Feature: PDS’s Star-Studded Luncheon and Gypsy Award Ceremony at The Beverly Hilton Hotel International Ballroomwas side-crackingly funny, and had a lot of choice comments that would be best not quoted here, but had the crowd in an uproar. Joni Berry, the glue that holds all of this together, introduced one of the best honoree lists in PDS history. Honored this year were George Chakiris, Barrie Chase and Toni Basil. What a marquee that would be!

The show, produced by incredible, noted Dancers/Choreographers, Lee Hale, Charlene Painter, Ted Sprague, Joe Tremaine, Anita Mann Kohl and Tommy Peel, is a tribute to who, what and why Dancers have been influential as a part of the Entertainment Industry.

BWW Feature: PDS’s Star-Studded Luncheon and Gypsy Award Ceremony at The Beverly Hilton Hotel International BallroomDick Van Dyke started off the festivities, which has become a yearly tradition. He was honored in 1999 by the PDS, and is always exhuberant and gracious. Joe Tremaine also lent his comments to the purpose of the event. HONOREES this year were Barrie Chase, who was Fred Astaire’s “Personally Chosen Dance Partner” in numerous films, introduced by Julie McDonald. Her film clips, edited by the incomparable Lee Hale, were varied and unique. She marked a time-period of dance that contributed to advancing dance as a narrative to moving the plot of a film forward.

Bruce Vilanch, who had us all in stitches, introduced Toni Basil, honored next, for bringing “street dancing” into the mainstream, with her mixture of hip-hop and ballet, was delightfully entertaining in recalling her early history and background as a member of a family that included a family vaudeville act and father who was a band leader in Las Vegas.< There is a tradition exclusively among dancers, all over the globe, to present a "Gypsy Robe" to one Dancer each year at such events. It exemplifies unique, llfe-long dedication to giving your soul and spirit to the Art of Dance. It is a revered accolade in the Dance World, as the highest honor to be the recipient of. Joanne Divito was the deserved recipient this year. Her life has been dedicated to dance, in many forms, as a teacher, choreographer, dancer on Broadway and head of Career Transition for Dancers, a revolutionary organization to help dancers find direction into a career after Dance. As a side note, Equity (A.E.A.) has proposed doing away with the name "Gypsy" as being un-PC; an unpopular idea amongst the Dancers who are the multitude of members of that Union. There has never been any intent to slur a minority culture; to Us, it is a term of endearment. Sandy Roveta, last year's Gypsy Robe recipient, was poignantly moving. When a dancer can pour her heart out to her peers, it is definitely from the heart. The poem she penned and read aloud, had everyone laughing and crying at the same time, as we all could relate! Here it is: BWW Feature: PDS's Star-Studded Luncheon and Gypsy Award Ceremony at The Beverly Hilton Hotel International BallroomBWW Feature: PDS's Star-Studded Luncheon and Gypsy Award Ceremony at The Beverly Hilton Hotel International BallroomThe absolute highlight of the afternoon was the Presentation of the PDS AWARD to Academy Award Winner George Chakiris for his Extraordinary Contribution To The Dance. Russ Tamblyn, (West Side Story, Seven Brides for Seven Brothers...) presented George Chakiris with the Award. BWW Feature: PDS's Star-Studded Luncheon and Gypsy Award Ceremony at The Beverly Hilton Hotel International Ballroom Seated at George's Table were Dance Royalty: The partial Cast from the Original WEST SIDE STORY! In addition to George Chakiris (Bernardo) & Russ Tamblyn, (Riff), in attendance were Jaime Rogers, (Loco) Maria Jimenez Henley (Teresita), Bob Banas, (Joy-Boy) Gina Trikonis (Graziella) and David Winters (A-Rab);Tony Mordente (Action) was unable to attend, but duly mentioned. In between were performances by local Dance Companies, and introductions of the many Celebrity/Dancers in the audience. On each side of the room were giant screens, where so many amazing dance clips were woven together and produced by Lee Hale that are priceless montages of Dance through History, and were all met with exuberant applause and appreciation. If you love to dance, love watching dance, or just enjoy dancers and their lively events, come to this spring event next year and contribute to the betterment of artistic endeavors. It's a hell-of-a show!