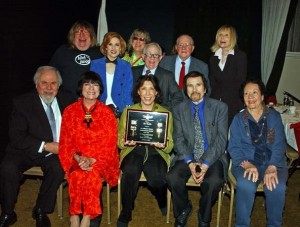 Lily was born in Detroit, Michigan, and over the years she made people laugh with her humorous characters from the child Edith Ann to the snarky telephone operator Ernestine. Some of these wacky characters were showcased on the hit comedy series Laugh-In, which ran from 1969 to 1973. Her work on the series catapulted her to stardom. She went on to appear in dramatic and comedic films, such as “Nashville” (1975), directed by Robert Altman; the working womenâ€™s revenge comedy “Nine to Five” (1980), with Dolly Parton and Jane Fonda; and “All of Me” (1984), with Steve Martin.

Since that time, Lily has continued to mix the serious and the humorous, appearing on such shows asFrasier, Homicide: Life on the Street, Will & Grace, and The West Wing. She has also lent her voice to several projects, including a guest vocal appearance on The Simpsons and as the character Mommo in 2006â€™s animated feature film “The Ant Bully.” She reunited with director Robert Altman for his last film, “A Prairie Home Companion” (2006), and is slated to appear in several upcoming films, including “The Walker” with Woody Harrelson.

Lily Tomlin has received numerous awards, including: four primetime Emmys; a special 1977 Tony when she was appearing in her one woman Broadway show, “Appearing Nitely;” a second Tony as Best Actress, two Drama Desk Awards and an Outer Critics Circle Award for her one woman performance in Jane Wagnerâ€™s “The Search for Signs of Intelligent Life in the Universe;” a CableACE Award for Executive Producing the film adaptation of “The Search;” a Grammy Award for her comedy album, “This is a Recording” (a collection of Ernestine the Telephone Operator routines) as well as nominations for her subsequent albums “Modern Scream, And That’s the Truth,” and “On Stage;” and two Peabody Awards â€” the first for the ABC television special, “Edith Annâ€™s Christmas: Just Say NoÃ«l” and the second for narrating and executive producing the HBO film, “The Celluloid Closet.”

In 1992, she was awarded the Women in Film Crystal Award. Lily was inducted into the Michigan Women’s Hall of Fame in 1998. In 2003 she was awarded the Mark Twain Prize for American Humor. Also in 2003, she was recognized again by Women in Film with the Lucy Award in recognition of her excellence and innovation in her creative works that have enhanced the perception of women through the medium of television. In March 2009, Lily received Fenway Health’s Dr. Susan M. Love Award for her contributions to women’s health.