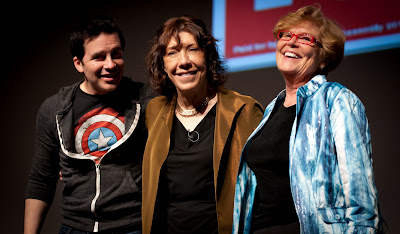 Headlined by six-time Emmy winner Bruce Vilanch, Hal Sparks (“Queer as Folk“) and Lilly Tomlin, the night got off to a bang with aÂ standing ovation for Torie Osborn.

When Ms. Osborn took the podium, supporters sprang to their feet in unison, and gave her a thunderous standing ovation.

Ms. Osborn was gracious and down-to-earth in the overwhelming aftermath.

In fact, earlier in the evening, I spied the effervescent politician dashing up the aisles to greet guests – in a patterned shirt-jacket fashioned in eye-catching hues of turquoise and blue (teamed with a chic black “t” and tasteful dress slacks that matched up) – and lead ’em by the hand to their comfy seats in the orchestra pit.<Â By the way, Osborn is quite unlike the overly-coiffed plastic-looking femalesÂ who tend to populate the political terrain.Â Osborne comes across as somebody’s caring “Mom”.

In her brief chat with the supporters present, she underscored it was time to bring back the “California Dream“, and that the spanking newly-created 50th seat in the State Assembly was a great place to start in the years ahead.

Sheila Keuhl – who was also on hand – went a step farther.

After noting that the 50th seat was comprised of a handful of tony neighborhoods (such as Pacific Palisades, Brentwood, Beverly Hills, Malibu, and West Hollywood, to name a few) she made an astute observation.

“It’s an open seat for a fabulous candidate,” she enthused.

“And, that candidate is Torie Osborn!”

All three comics brought their A game, but the highlight of the night went toÂ Lily Tomlin for reworking her famous “Ernestine” routine – Ernestine as an operator for the claims department of a health insurance company.

“Oh, that’s elective surgery. We elect not to pay for it,”
“We don’t care if you’re fed up. We only care that you are paid up.”
“HMO doesn’t mean Help Me Out, ‘ya know”
You can read a full review of the night onÂ Julian Ayrs blog.
To see all my photos of the night,Â go to this link.