South Florida
Thanks for the memoirs
Humor breaks out when celebs do book readings in “Celebrity Autobiography,” coming to Kravis Center.
By Rod Stafford Hagwood, Staff writer
4:42 p.m. EST, January 26, 2015 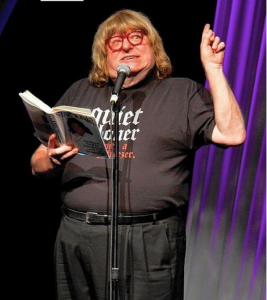 “Celebrity Autobiography” just might be one of the most successful shows you’ve never heard of.

The comedy – actors read from celebrity memoirs live onstage – has run for five sold-out years in New York City, landed a 2009 Drama Desk Award and toured all over the United States. It arrives at West Palm Beach’s Kravis Center for the Performing Arts, Jan. 28-Feb.1.

In West Palm Beach, the cast will include Lainie Kazan (“My Big Fat Greek Wedding,” “My Favorite Year,” “Beaches”) and Gary Beach (“The Producers,” “Beauty and the Beast,” “La Cage aux Folles”). Bruce Vilanch (“Hairspray,” writer for the Emmys, Tonys and Oscars) will appear in the Saturday matinee show.

“Celebrity Autobiography” started when wife-and-husband co-creators Dayle Reyfel and Eugene Pack, both television writers and producers, had some friends go onstage in L.A. and try the concept out in front of an audience. It was an instant hit.

“We just got about 12 friends together and we read excerpts,” explains Reyfel. “[The theater owner] was so blown away by the audience’s reaction he wanted us there every week.”

Pack recalls, “Years ago, 10 years ago or even more, I came across a hard-cover edition of ‘Vanna Speaks‘ by Vanna White, her memoir. I went through the book and there’s this one chapter where she talks in detail about how challenging it is to flip the panels on ‘The Wheel of Fortune.’ And my background in comedy kicked in. I thought, what if you were to read this out loud…what would be the reaction?”

The reaction was lines around the block, particularly when the show went overseas in London and Sydney, Australia.

“I think that mainly because people understood what this was,” says Reyfel. “The show had a reputation already and people knew what they were coming to see.”

What they are seeing are famous people, script in hand, reading from autobiographies. For the South Florida run, famous snowbirds such as Tiger Woods, Jennifer Lopez, Burt Reynolds, Ricky Martin and Joe Namath will have their words in the spotlight alongside word-for-word snippets from the likes of Bieber and Beyonce.

“The concept of the show is that we have a lot of celebrity performers getting onstage and acting out other actors’ memoirs,” says Pack. “But when you read it out loud, it’s just astounding what people have written. It’s not only funny, but fascinating and dramatic.”

But the show adds drama by having multiple memoirs read together, forming a scene, as is the case with the Richard Burton/Elizabeth Taylor/DebbieReynolds/Eddie Fisher scandal (“It’s he said, she said, she said, he said,” says Pack.)

Reyfel explains further, “The Liz Taylor, Debbie Reynolds, Eddie Fisher thing, that’s like a Rashomon three-act play where everyone has a different point of view and we merge them back together.”

That theatrical staging is also given to the Burt Reynolds/Loni Anderson saga.

Reyfel adds, “And a lot of it takes place in Jupiter, Florida.”

The show also puts autobiographies into groupings such as sport stars and foodies. “Neil Sedaka, that was a gem from the beginning because he just talks about what he eats for every single meal,” says Reyfel.

And the material in the show is in a constant state of flux.

“We’re always adding new pieces to the show,” explains Pack. “We like to keep it current. But we also like to dig deep into things like Zsa Zsa slapping the cop. People love hearing those classic stories. You’d be astounded how many memoirs come out for us to comb through, like very week. Miley Cyrus has a book out already.”

But no matter what celebrity they focus on or where they perform, there is one constant with the audience according to Pack: “They always ask, ‘You made that up on the spot. It was improvisation, right?’ I always answer, ‘Seriously, we could not make up this stuff if we tried.’ ”