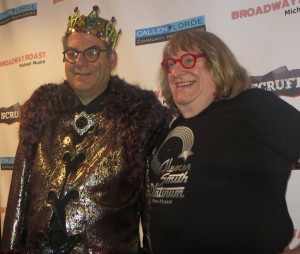 Last night, a “who’s who” of New York City gathered to honor Michael Musto at a roast given in his honor. No, really, who was who?

Comedian Bruce Vilanch was the fabulous emcee for the evening. Rosie O’Donnell opened the show with a few words, roasting Musto by reminding the audience of how their relationship began many years ago.
“I know it wasn’t really a shock to anyone in this room that I was a big fucking lesbian but middle America apparently was confused,” O’Donnell said. “And Michael Musto was a very pissed off fag.”

“Very faggy gay men seem to be very troubled by dykey gay women who refuse to acknowledge their lesbianism,” she went on.

But obviously the water is under the bridge, as O’Donnell showed up to support Musto’s event for a good cause. O’Donnell ended her set by matching funds raised for the Callen-Lorde Center, donating $20,000 to the LGBT wellness center in New York City.

Jinkx Monsoon, Bianca Del Rio, Real Housewife LuAnn D’Agostino and Judy Gold were just some of the notable names on the bill, reading each other and the man of the hour. Del Rio of course was a highlight of the night — and right at home up there, as roasting is what she does best.

The evening was produced by Daniel DeMello and Nathaniel Nowak. Directed by Rachel Klein, many of the night’s best jokes were written for the roasters by Erik Ransom and Matthew McLachlan. Even Musto himself wrote some of the best digs made at his own expense.

Here are 14 of the funniest moments from Michael Musto’s roast:
Bruce Vilanch to United Airways:

“I came in from LA for this. It was incredible this morning as they dragged me off my United flight. Which was really unusual because I thought United only does Chinese take-out.”

“Bianca Del Rio, Hurricane Katrina is only the second worst thing to ever happen to New Orleans.”

“I don’t really know who Randy Rainbow is, but from the looks of his name, I guarantee he’s not allowed 800 feet anywhere near a grade school.”

“Michael Musto is Al Franken run over by a pride parade.”

“She has her differences with Trump. But she is a lot like Trump. She has five different kids from three different wives. It’s funny, because if Rosie goes ahead and buys another child, she will have to live in a shoe. And with her being a lesbian, can you imagine how fucking ugly that shoe is going to be?”

“I have to give you a lot of credit, Musto. You somehow survived the ’80s. It’s like your face was the original PrEP.”

“With all the fashion sense of a hospital out-patient, Michael Musto looks like Ray Romano if he had a much harder life.”

“These are scary times, folks. I don’t understand how people can continue to deny climate change in 2017. I mean, the proof is right in front of us! It’s almost summer and Bruce Vilanch’s neck pouch is still stuffed with the acorns he foraged last fall!”

“Other recommended viewings on Netflix for Hurricane Bianca are ‘Gouging Their Eyes Out.’”

“The last time you got fucked was by genetics.”

“You look like Kathy Griffin had sex with meth!”

Lucy The Slut to the drag queens:

“Look at these drag queens! They look great, but their makeup is kinda like Febreeze. Pleasant, but it’s main purpose is to cover up shit.”

“Jinx, you do a brilliant Edie Beale impression, except she happened to be talented, not just mentally ill.”