Playbill.com
Photo Flash: Carol Channing at ‘Cabaret at the Castle’
Back to the Article
by BWW News Desk 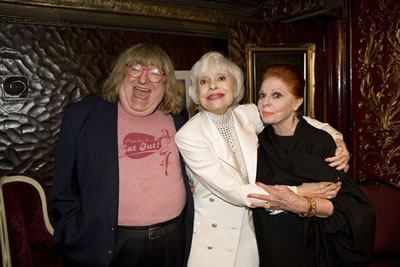 Friends and colleagues including Bruce Vilanch, Valarie Pettiford, Rachel York, Rita McKenzie, Carole Cook, Thom Troupe, Kathryn Jootsen, Lily Tomlin, Florence Henderson, Donna Mills, Jackie Joseph, Channing Chase, Tippi Hedren, JoAnne Worley, Kate Linder and the Los Angeles cast of RENT among others were more than thrilled to turn out for this special engagement of “The First 80 Years are the Hardest,” that marked Carol Channing’s return to the stage after her accident last year that forced her, for the very first time in her 70 year career, to cancel all scheduled performances.

Ready and willing to welcome her back to where she belongs, the audience was there to worship the veteran musical theatre icon, and Channing did not disappoint. Comments made by those who attended the evening included JoAnne Worley saying “I was Carol’s stand-by when Hello Dolly first opened. She told me in advance that she’d never be out and she wasn’t,” then added “I have Miss Channing’s eyelashes on tonight because I forgot my own and when I asked, Does Carol have extra eyelashes? They said yes and brought me a pair of hers with glue.”

No novice to cabaret herself, and currently touring with her own show called “All The Lives of Me,” is Florence Henderson who remarked about her friend Carol Channing “She inspires me on so many levels. She has impeccable comedic timing. I think she knows a secret that we don’t know. She’s amazing, has such strength mentally and physically and emotionally. And her husband, Harry, it’s a good thing she married him otherwise I’d give her a run for her money!” Close at hand to offer an additional note is Donna Mills with “She’s amazing, enthralling on the stage. She grabs you from the minute she walks out.”

Lily Tomlin is proud to have known the Broadway Diva since she was 17 recalling “I’ve known Carol for many years. She’s one of the funniest women ever. The first time I saw her, I went to see her one-woman show in Detroit. I went to the backstage door and she came out, there were a lot of young people hanging around adoring her and she was so generous. I’ve worked with her on Laugh-In and I’ve done lots of charity appearances with her.” Lily’s I Heart Huckabees co-star, Tippi Hedren, added “I cant remember when I have had more fun. Whether she is on stage or not, I can’t help wearing a smile around Carol.” Bruce Vilanch recalled once in San Francisco he entered a Carol Channing look-a-like contest, “But they thought I was Shelley Winters.” And AMC’s Mad Men star, Channing Chase, quickly summed it up with “The woman is simply amazing!”

The intimate evening with Carol Channing was held as a benefit announcing the formation of the Dr. Carol Channing Foundation for the Arts (www.carolchanning.org), an organization dedicated to raising the awareness for the need of and to bring the arts back into the public school system. Carol’s husband, Harry Kullijian, was proud to announce that a PSA is currently being produced that will premiere at the National PTA meeting in May. So far the confirmed participants include Stefanie Powers, Donna Mills, Loni Anderson, Dorian Harewood, Lily Tomlin, Lesley Ann Warren, JoAnne Worley, Florence Henderson, Kate Linder, and more. The PSA’s are being done with the gracious donation of CityTV in Santa Monica under the direction of the PSA’s producer, B. Harlan Boll.

Miss Channing’s engagement was also the inaugural performance for the new Cabaret at the Castle which has been developed in the famous Magic Castle’s lower level, known as The Inner Circle (7001 Franklin Avenue, Hollywood, CA 90028). Up until now, the rarely used space has been virtually unknown to even many of its own members. It houses a eclectic collection including WC Field’s trick pool table, Marionettes from The Sound of Music, Edgar Bergen’s Ventriloquists dummies, Walt Disney’s original miniature of the Haunted Mansion, the original automaton Madam Carnak that Johnny Carson (who was an amateur magician and Magic Castle member) based his famous character, and the actual Hello Dolly! bar (from the movie, not the Broadway production, with apologies made to Carol).

The evening was a very special gathering as Carol offered memories, humorous storytelling and, of course, some of her signature tunes, bringing the audience up close and personal with the Ultimate Broadway Jazz Baby. She shared anecdotes as well as a few amazing impersonations of friends like Ethel Merman, Sophie Tucker, Joan Crawford and Tallulah Bankhead, who “Had a problem. She couldnt keep her clothes on. I had to keep from looking down, which wasnt easy.” The evening included banter, reminiscent of Burns and Allen, with Carol’s husband Harry Kullijian and a plea to support Arts in the public school system.

Adding to the evenings festivities, Carol appeared wearing the Gianni Versace Tiara valued at an Estimated $3 Million that will be offered at Public Auction on the Bidz.com Site, commencing on Monday, March 23rd, 2009 at 9:00am PST.

In conjunction with the Tiara auction, Bidz.com is partnering with Aid for AIDS, a non-profit premier service provider for Los Angeles County whose mission is to provide direct financial assistance and critical support for the necessities of life to those impoverished and disabled by HIV/AIDS. Bidz will be donating a substantial amount of the funds raised from the on line auction to Aid for AIDS. When approached by Aid for Aids, Miss Channing enthusiastically agreed to help by graciously contributing her support and celebrity to the fund raising efforts, Ms. Channing will be making media appearances nationally on behalf of Aid for AIDS to help promote the Bidz.com Versace Tiara Auction. “Who better to promote the auction than the original Loreli Lee who sang “Diamonds Are A Girl’s Best Friend” in Broadway’s 1949 hit “Gentlemen Prefer Blondes,” said Terry Goddard (executive Director of Aid for AIDS).

It was a nervous security team that hovered over the famous tiara as it was offered from Carol To America’s favorite bitch, Alison Arngrim, then to America’s favorite mom, Florence Henderson, who then placed it on her “Ladies of the House” co-star, Donna Mills, before crowning JoAnne Worley with it. Shortly afterward it came to rest, slightly cockeyed, on Lily Tomlin, but then finally found itself on the regal head of the glamorous Tippi Hedren before Bidz.com president, Leon Kuperman, put it back in its protective case.

The world renowned Versace Tiara contains over 1,200 diamonds, all of which are GIA or EGL certified. The Tiara has previously been held only by private collectors – until now. This is the first time in the history of the piece that it is being made available to the public for purchase. Auction pre-qualification information, investor details and Tiara diamond certificates can be found at www.versacetiara.com or visit the Bidz website at www.bidz.com for more information.

Ms. Channing’s illustrious and varied career spans movies, Broadway, TV, countless albums, authoring a book and has earned her three Tony Awards, a Golden Globe and and Oscar nomination. With no signs of slowing down, she plans to continue touring with her one woman show promoting the work of her foundation and is proudly anticipating the upcoming release of her new gospel CD entitled “For Heaven’s Sake.”