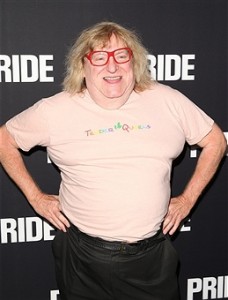 If you love something, set it free, and if it returns, it was meant to be.

Or have the execs at HBO cancel it, and if it returns, it was meant to be watched. Lisa Kudrow‘s meta-comedy The Comeback, which was axed nine years ago, is going to be back on the air and is just as funny as ever.

Last night, Hollywood’s El Capitan Theater unfurled the red carpet in celebration of Kudrow’s reprisal of her role as the awkward, repressed, self-deluded Valerie Cherish. The artist formerly known as Phoebe Buffay was joined at the gala screening of the new season’s first two episodes by the show’s co-creator Michael Patrick King, as well as a cavalcade of returning co-stars including Laura Silverman, Lance Barber and Damian Young. The cast was bolstered by a roster of the town’s top power gays, including Andrew Rannells, Jane Lynch, Sara Gilbert, Dan Bucatinsky and queen of queer comedy Bruce Vilanch.

“I hope Mickey the makeup guy is in it,” said Vilanch, chatting about the new season before the screening. “I missed the end of the season, so I hope he didn’t die.”

Fans of Mickey, Valerie’s personal makeup artist/sassy gay sidekick, portrayed by Robert Michael Morris, can breathe a sigh of relief. The character survived his melanoma scare from the end of the previous season. And thank god, because Mickey is this series’ version of The Simpsons’ Ralph Wiggum. Every line out of his mouth is comic gold.

For those who were too cheap to spring for premium cable nearly a decade ago, here’s the CliffsNotes version of The Comeback. The mockumentary-style series is like one of those Russian nesting dolls. A reality TV show chronicles faded television star Valerie Cherish as she shoots a cheesy sitcom called Room and Bored in a desperate attempt at recapturing the spotlight. Its a show about a show about a show.

The new season is even more meta. Picking up nine years after the cancellation of the short-lived sitcom, Cherish’s career is flailing. Among her many missteps is self-sabotaging her chance at being one of Bravo’s Housewives of Beverly Hills several years prior, shown via pseudo-raw footage in a hilarious scene with Frontiers friend Lisa Vanderpump. Valerie discovers that Paulie G, the drug addict douchebag who wrote Room and Bored, has created a new show called Seeing Red, a derogatory dramedy (“its like a comedy without the laughs”) about his experience working with Cherish. When Val storms into a casting session to confront him, she ends up reading for—and accepting—the lead role, thus playing her own insulting caricature. For those at home keeping score, the series is now a show about a show capturing a show that’s rehashing what happened behind the scenes of a show that was framed by a reality TV show. Despite the thickly layered premise, the execution is clean and laugh-filled.

After the screening, the audience moseyed over to The Roosevelt for the after-party. Waitresses in red-headed Valerie Cherish wigs doled out wine and mini ahi steaks to HBO’s extended family. But the most popular gay lunch table was Bruce Villanch‘s. As the adage goes, if you have nothing nice to say, go sit next to Bruce. In between the sass and the snark, the conversation touched upon the topic of Frontiers’ upcoming “L.A.’s Most Eligible Bachelors” issue.

“I’m one of you,” quipped Vilanch to the magazine’s collective readers. “I’m not young, I’m not nubile, but I’m a bachelor.”

Robert Michael Morris had a more specific notion of his perfect man. “Someone who cooks and cleans and never criticizes and thinks I’m the best thing since sliced bread,” he said.

Girls heartthrob Andrew Rannells happily played along, although he doesn’t currently qualify as a bachelor. “I have a boyfriend, so I already have the ideal mate,” the angel-faced actor beamed.

Well, Andrew, if you love him, let him go. If he returns to you, it was meant to be. If he doesn’t, the rest of us boys potentially have a shot at you once again.