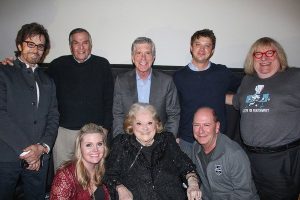 Standing room only crowds gathered for a series of star studded Los Angeles premieres of “WAIT FOR YOUR LAUGH” about the legendary ROSE MARIE, who has had the longest active career in history. A trail blazer for both children and women with entertainment roots that has spanned Vaudeville, Radio, Film, Vegas, Broadway, as well as both Daytime and Primetime Television.

Among the list of appearances by personalities participating in LA screening Q&A’s were Dick Van Dyke, Peter Marshall, Tom Bergeron, Dan Harmon, director Jason Wise and the iconic Rose Marie herself. The assemblage had an equally impressive list if patrons including Jane Lynch, Bruce Vilanch, George Chakiris, Teresa Ganzel, Margaret O’Brien, Jackie Joseph and Dick Van Dyke co-star, Larry Matthews. “Im a huge fan of Rose Marie and the documentary is amazing,” commented Jane Lynch. Adding, “I do a tribute to Rose Marie in my cabaret show and tell the story about how I wanted to be a comedy writer because of her role of Sally Rogers,”.

“Wait For Your Laugh,” which has qualified for Academy Award consideration under “Best Documentary,” made its West Coast debut this weekend at The Laemmle Town Center (Encino), The Laemmle Royal (Santa Monica) and the world famous Egyptian Theatre (Hollywood). Eager patrons willingly paid to sit in the isle of the theater at the latter in order see the film that Carl Reiner remarked, “This is no bullshit … This is the finest documentary about anybody I have ever … ever seen … Im immediately saying ‘Where do we vote?!’ Because this has to win every award it ever goes after!”

Social Media has found a new darling in Miss Rose Marie, who has embraced the medium as ambitiously as she has every other entertainment outlet in her 90+ year career. Both fans and critics are lavishly praising the efforts of director Jason Wise and his team. Among the many surprises contained in this cinematic gem are never-before-seen home movies taken behind the scenes by Rose Marie’s late husband, Bobby Guy, that include cast members of The Dick Van Dyke Show, The Doris Day Show, as well as on the road with the cultural phenomenon called “4 Girls 4” and appearances with Johnny Carson, previously thought to be lost.

This is the untold story of fame, love and tragedy, dealing with every subject from the mob to sexual harassment in American entertainment through the eyes of one pioneering child to woman, who witnessed it all first hand. “Rose Marie was a child star before Shirley Temple was even born,” remarks friend and industry great, Peter Marshall, adding “…and she has done it all.” From starring in the first all talking short film (“Baby Rose Marie: The Child Wonder”) released in theaters nationwide to become the first woman to host a TV game show (“Scoop The Writers”) and the first female headliner in Las Vegas by opening the Flamingo Hotel, as well as skillfully handling the mob affiliations that went along with it, including referring to criminal mastermind, Al Capone as “Uncle Al.” “It’s interesting to think that the mob was more respectful of women then, than men in the entertainment industry are today,” commented Dan Harmon at the Egyptian screening.

As a child star, she earned millions in todays money that she never received. Every dime went to her father, a cruel man known to the mob as “Happy Hank,” who considered “Baby Rose Marie” his personal property, and who used her to support his primary family, making Rose Marie and her brother, Michael, illegitimate. Something that she found out from a cousin only after she got married. Adding insult to injury, her father had given his other children (a boy and a girl) the same names.

“Wait For Your Laugh” is above all else the ultimate true love story. Despite unimaginable obstacles, finding a soul mate and “…surviving the greatest loss someone can experience,” as Dick Van Dyke recalled, Rose Marie has succeeded where many have failed, by navigating the very difficult career challenges from child to adulthood.