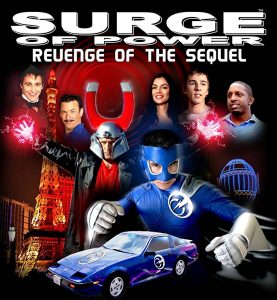 Cinema’s first out gay superhero is back in the long-awaiting sequel, “Surge of Power: Revenge of the Sequel,” on the 10th anniversary of the release of the first movie, with our 3 featured celebrities returning from “Surge of Power: The Stuff of Heroes,” Nichelle Nichols (Uhura from Star Trek), Lou Ferrigno (The Incredible Hulk) and Noel Neill (Lois Lane from Adventures of Superman) with over 50 stars joining them in the sequel like Eric Roberts (The Master from Doctor Who), Linda Blair (Exorcist), Gil Gerard (Buck Rogers in the 25th Century), Robert Picardo (The Doctor from Star Trek: Voyager), Frank Marino (Star of Divas Las Vegas), Shannon Farnon (Wonder Woman from SuperFriends!), Reb Brown (Captain America from the Captain America TV movies), Bruce Vilanch (Hollywood Squares, Emmy Award winning writer) and many, many more!

The sequel is the final movie appearance for both Noel Neill and Jack Larson (Jimmy Olson from Adventures of Superman) and one of the last movie appearances for Richard Hatch (Apollo from Battlestar Galactica). Visit us at http://surgeofpower.org to find out more and look for a screening near you!