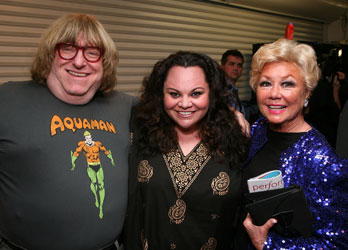 The national tour of South Pacific celebrated its opening night at the Ahmanson Theatre on Wednesday, June 2. Bartlett Sher has directed the production.

In attendance were several alumni from various stage and screen incarnations of South Pacific, including Mitzi Gaynor (Nellie), John Kerr (Cable), and France Nuyen (Liat) from the film version; Shirley Jones and BarBara Luna from the original Broadway run of the musical; and Glee star Matthew Morrison, who played Lt. Cable on Broadway as part of the original revival cast of the musical.