Pink News
Interview: Wanda Sykes on stand-up, her four Emmys and comingÂ out 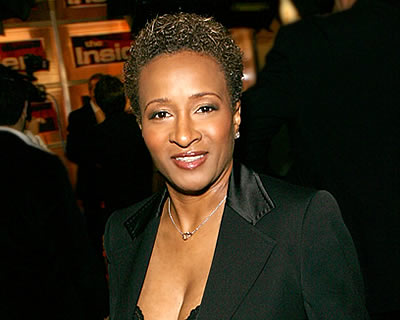 Sheâ€™s an award-winning stand-up comedian whoâ€™s successfully made the transition from comedy circuit to television and film. Sheâ€™s a talented writer and performer whose trophy cupboard boasts four Emmys and an American Comedy Award. She unintentionally came out at an LGBT rally in Las Vegas in 2008. Laurence Watts interviews the charismatic Wanda Sykes.

Wanda wasnâ€™t always a professional comedian. Her first job after university was as a procurement officer for Americaâ€™s National Security Agency (NSA), a job that required her to have top-secret security clearance. It was while she was there that she started doing stand-up.

â€œAs I remember, there were several of us who had side jobs,â€ she says. â€œSome of the women sold cosmetics and some of the guys were doing stocks and trading. I think quite a few of us were dreamers who wanted to do other things. It wasnâ€™t until I said I was leaving to do stand-up full time that everybody told me I was nuts: â€œWhatâ€™s wrong with you? You have a good job, security, health insurance and everything!â€ That kind of stuff.â€

The calculated decision to leave the NSA came five years into her career there. Wanda knew she could make a living out of being funny.

â€œI was travelling around at weekends playing clubs,â€ she explains. â€œ4-5 hours away was pretty much how far I could go at weekends and make it back in time for work on Monday. Once Iâ€™d made it to feature spots I added up how much I could make, what my budget was to live and I said to myself: you can do this. If I worked clubs full time, Iâ€™d be OK. So I headed out and knew that if I was good and worked hard Iâ€™dÂ eventually headline.â€

Less than five years after leaving the NSA, Wanda got her big break. In 1997 she joined the writing team for The Chris Rock Show. Two years later the team won an Emmy for Outstanding Writing for a Variety, Music or Comedy Special. She also made her first television appearances, featuring in seven of the showâ€™s episodes.

Though sheâ€™d begun to make inroads into television she continued to excel on the comedy circuit, so much so that in 2001 she won the American Comedy Award for Outstanding Female Stand-Up Comic. Shortly afterwards she was approached to write for The 74th Annual Academy Awards.

â€œI got a call from Bruce Vilanch who told me Whoopi Goldberg would be hosting the show. She wanted me to come on board and be part of the writing staff. I was like: â€œThe Oscars? Are you kidding me? Hell yeah!â€ In the end though, I think I was a bit too edgy. Truthfully, I donâ€™t know how many of my jokes made it into the show, but I cracked up Whoopi, Bruce and the rest of the room.â€

Would she ever want to follow in the steps of Goldberg and other comedians like Bob Hope, Billy Crystal and Steve Martin and host The Oscars herself? Her answer surprises me.

â€œYou know what? Right now, I would say no. I think itâ€™s a thankless job. If I was going to do it Iâ€™d want to throw rocks at the audience. Thatâ€™s what I do. Thatâ€™s why I loved what Ricky Gervais did at the Golden Globes. Itâ€™s not that Iâ€™m disrespectful of the Academy, I think itâ€™s great, but right now thatâ€™s not a job I would do.â€

Increasing popularity and visibility resulted in her own sitcom on Fox, Wanda at Large, which ran for two seasons and attracted audiences as high at 14m. In 2004 Sykes was named one of Entertainment Weeklyâ€™s 25 funniest people in America.

â€œIt was an honour to make the list, but for me itâ€™s all about the audience,â€ she explains. â€œI try not to look at what other comics are doing or whoâ€™s selling out what shows. I just focus on what Iâ€™m doing. Iâ€™m really grateful I can go on stage, tell jokes and have a good life.â€

By 2005 Sykes had bagged three more Emmyâ€™s, taking her tally to four. Can one ever have too many Emmyâ€™s?

â€œIâ€™m looking at them now and you know, really, I think I could clear a few things off of that space to make room for more!â€ She starts laughing, â€œI donâ€™t need that picture of my kids up there! Hell, if I won another that could definitely go!â€

After 2005 Wanda began appearing in movies with increasing regularity: Monster-in-Law (with Jane Fonda and Jennifer Lopez); My Super Ex-Girlfriend (with Uma Thurman, Eddie Izzard, Luke Wilson and Anna Faris) and; Evan Almighty (with Steve Carell) to name a few. Wandaâ€™s distinctive voice can also be heard in the animated films Over The Hedge and Rio. In 2012 she will play Sid Slothâ€™s Grandmother in Ice Age: Continental Drift. Did she ever think sheâ€™d be a film star?

â€œNot at all. I just wanted to be a really funny comic. Thatâ€™s still my goal. I think focusing on that means these other things come along. It always surprises me when I get offered a role or Iâ€™m asked to audition. Iâ€™m like: â€œReally? Oh, OK!â€â€

On November 15th, 2008, at the age of 44, Wanda came out as a lesbian. She announced her sexuality to the world at a Las Vegas rally to protest the passing of Californiaâ€™s Proposition 8. Since she was in town for a gig at Planet Hollywood sheâ€™d planned on simply turning up and showing her support. One of the organisers saw her in the crowd and called her up on stage. She was pissed off that Prop 8 had passed and began â€œrunning her mouth.â€ She hadnâ€™t intended to make a speech, let alone come out, but she did both. Wanda had privately married her girlfriend 21 days earlier. Does she regret having waited so long to come out?

â€œYou know what, I look at kids now, teenagers, and they already identify with who they are theyâ€™re very comfortable. I not only admire that, but Iâ€™m a little envious as well,â€ she tells me. â€œI lived so much of my life trying to be something I wasnâ€™t. On the other hand I believe everything happens for a reason and at the right time. I did it when I was ready, but when I look back of course I wish Iâ€™d been open and out.â€ She laughs before adding, â€œI mean, think of all that hot ass I could have got before I got married!â€

In May 2009 Sykes became the first ever LGBT entertainer at the annual White House Correspondentsâ€™ Dinner. In attendance were President Obama, the First Lady, the entire White House press corps and many distinguished guests. Wanda brought the house down with jokes about the President, Sarah Palin, conservative radio talk show host Rush Limbaugh and Fox Newsâ€™ Sean Hannity. Did she have to submit a
script beforehand?

â€œI thought Iâ€™d have to, but no. I could have said anything. The only note I got was a couple of hours before I was due to go on. My publicist said the president of the Correspondentsâ€™ Association had called her to make sure I wouldnâ€™t be using the f-word or the n-word. That made me laugh.â€

Already a poster child for the LGBT and African American communities Sykes was reluctant to publicly disclose sheâ€™d been diagnosed with breast cancer in early 2011. The ductal carcinoma in situ (DCIS) was only discovered when sheâ€™d gone into hospital to have a breast reduction. Having lost a couple of friends to cancer and with a history of breast cancer on her motherâ€™s side of the family she took the decision to have a bilateral mastectomy rather than wait and see if the cancer developed. She had the surgery on 4th August. She was back on stage doing stand-up on 9th September.

With all the recognition a career in TV and film brings, I ask her if itâ€™s easier to make people laugh now that sheâ€™s established?

â€œI think Johnny Carson may have said this, but as a comedian the audience kind of gives you the first 10 minutes,â€ she answers. â€œTheyâ€™re like: â€œOK, we know sheâ€™s funny, weâ€™ll go along with her.â€ After those first 10 minutes though they now seem to have higher expectations than they used to. So although I now find comedy easier, because Iâ€™ve done it so long, I know I have to raise the bar a little every time I go outÂ there.â€