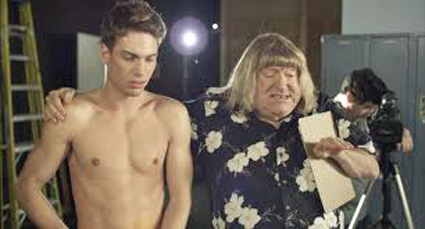 Last year’s Vancouver Queer Film Festival boasted sold out two screenings of Casper Andreas’s fag-hag comedy Violet Tendencies (which stars Mindy Cohn of Facts of Life fame). This year, the director is back with his latest feature, Going Down in LA-LA Land .

So what’s a gorgeous gay boy (with an admirably cut body who can’t keep a day job but is desperate for fast cash) to do? No surprises here, as his preppie good-looks are quickly traded in for whatever offer comes (hardy har, get it out of your system) his way. Contrary to his wholesome appearance, his slide down the slippery slope into the sex biz runs at a pretty brisk clip, as do his relationships.

That pretty much sums up the film as a whole: the pace of events keep things hopping along and entertaining but that prevents the characters or narrative developing any convincing depth. The film’s most ineffectual moments are, unfortunately, some of its most dramatic ones.

Adam’s immediate attraction to the dubious-seeming Nick (played by Andreas himself) is hard to swallow (okay, kids, that’s enough). Any internal turmoil or consequences of his sexcapades are too quickly eschewed for shuffling him into yet another sexual situation faster than you can say Bel Ami. While the narrative purports to unveil the dark side of gay Hollywood, it somehow remains a little too content to skim along the surface of things to offer any authentic surprises or insights.

When a closeted family sitcom star requests Adam as an escort date and they hit it off, things look promising. Alas, the story ends up culminating in an overly idealistic conclusion.

Were Adam’s storyline more evenly infused with the unpredictability given to Candy, the film might have provided a more overall satisfying experience. Nonetheless, audience-pleasing laughs do abound. The film is peppered with cameos by the likes of Perez Hilton, Alec Mapa, and Bruce Vilanch, and the spirited Candy delivers some of the film’s most hilarious moments. Of course, there are plenty of shots of the beautifully sculpted Ludwinski to enjoy.

Although the film played last night (August 17) with a Q&A period with Andreas, there’s a second screening on Friday (August 19) at 9:30 p.m. Granville 7 (855 Granville Street). Visit the Vancouver Queer Film Festival website for more details. The festival runs until Sunday, August 21 and there are plenty of other selections to check out as well.