Gay Ciy News
Bare Essentials
At 20, Broadway Bares still has plenty of tricks tucked into its G-string
BY DAVID KENNERLEY 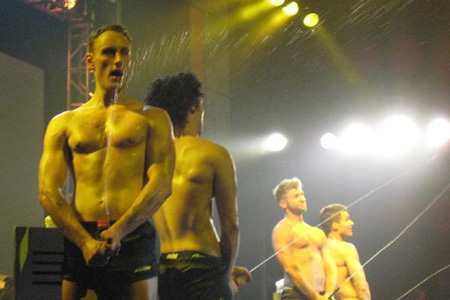 Whatâ€™ s truly astounding â€” but was surely tested in the shower scene â€” is â€œBroadway Baresâ€â€™ knack for teasing the limits of burlesque without treading on tasteless territory. (GAY CITY NEWS)
Published: Thursday, June 24, 2010 6:58 PM CDT
When â€œBroadway Bares,â€ the saucy, sensational burlesque show produced by and benefiting Broadway Cares/ Equity Fights AIDS, was conceived 20 years ago, the world was a decidedly different place. AIDS had yet to be tamed by protease inhibitors, and prime-of-life members of the theater community were dying at an alarming rate.

Many people now think of AIDS, if they bother to think of it at all, as a scourge in impoverished quarters far, far away, but BC/ EFA knows better. Itâ€™s everybodyâ€™s epidemic, and, as the creators vowed, the one-night-only annual fundraiser will keep on bumping and grinding until thereâ€™s a cure. Theyâ€™ve raised upwards of $8 million so far.

This year, the energy that blasted from the Roseland stage in â€œStrip-opolyâ€ felt as urgent and exhilarating as ever. Sure, the stars were out in full force â€” Vanessa Williams and Kristin Chenoweth each belted out a racy number, and a top-hatted Euan Morton made for a dashing emcee. Lucy Liu appeared as Miss Community Chest, and later the nearly sold-out crowd was treated to cameos by Alan Cumming, Diana Degarmo, Cheyenne Jackson, Lea DeLaria, Nick Adams, Charles Busch, Bruce Vilanch, Reichen Lehmkuhl, and many more. And of course, creator and uber-choreographer Jerry Mitchell took his turn, wearing the same skimpy Indian outfit he wore on â€œWill Rogers Folliesâ€ two decades ago.

But, as everybody knows, the real attraction is the bevy of sweaty, go-for-broke performers who, under the dazzling direction of Josh Rhodes, pour on the charm while stripping off their costumes. And yeah, some of them take it all off, in the most artfully naughty ways.

For me, part of the fun is seeing how the strips are integrated into the goofy theme; â€œStrip-opolyâ€ proved particularly well-suited for the conceit. The WASP housewives of Connecticut Avenue were invaded by trailer trash vixens, while Orient Avenue conjured a whirl of muscular, chiffon-clad aerialists. The Railroads were represented by a line of choo-chooing male dancers that boasted one happy caboose. The biggest laughs were from the Boardwalk number, set on the Jersey Shore, where Snookie took one on the jaw and everyoneâ€™s fantasy coupling of The Situation and Pauli D came deliriously to life.

The genre-confused score, a patchwork of original and sampled, shamelessly uncredited tunes, ricocheted from Journey to Lady Gaga to Rihanna to Anita Ward and into the wild beyond.

And bear in mind, most of the 120 performers onstage â€” many of whom were too young to walk when â€œBroadway Baresâ€ was born â€” are currently in other musicals, which means they donated their precious time and talents for the cause.

Whatâ€™ s truly astounding is â€œBroadway Baresâ€â€™ knack for teasing the limits of burlesque without treading on tasteless territory. Some people, however, may feel the line was finally crossed with the Waterworks routine, surely inspired by the acts of derring-do performed at that other flesh-filled Roseland institution, the Black Party. The jaw-dropping sequence featured a veritable fountain of dudes urinating on a begging buddy and unsuspecting audience members (from concealed tanks of what I hoped was water).

The musical accompaniment? A Strauss waltz, I believe, followed by a snippet of James Taylorâ€™s â€œShower The People You Love With Love.â€