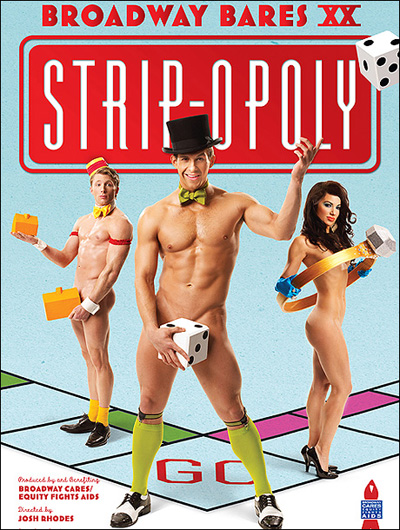 It’s Broadway’s sexiest night of the year: Broadway Bares XX: Strip-opoly will be presented June 20 at the Roseland Ballroom at 9:30 PM and midnight. Josh Rhodes, who was the assistant choreographer for the award-winning The Drowsy Chaperone, directs.

The opening number, “The Best Game in Town,” penned by David Nehls, will be performed by Euan Morton.

“Grab your favorite piece (Dog? Ship? Boot? Thimble?), roll the dice, and get ready to put money into the community chest to help Broadway Bares XX: Strip-opoly reach their $1 million fundraising goal to benefit BC/EFA,” according to press notes. “This year’s [fundraiser] will bring a whole new definition to the phrase ‘game night’ when over 200 of Broadwayâ€™s sexiest dancers come together for the hottest burlesque show this side of Park Place.”

A little Bares history: Nearly 20 years ago, Tony winner Mitchell, who once danced nearly naked on a drum in The Will Rogers Follies, found himself inspired to take it all off to raise money for Broadway Cares/Equity Fights AIDS, and Broadway Bares was born. The first year, he and seven other Broadway dancers raised $8,000 for the charitable organization. Since that time, the fundraisers have brought in over $5.5 million for BC/EFA.

Director Rhodes has performed in the Broadway productions of Urban Cowboy, Bells Are Ringing, Fosse and Chicago.

Broadway Cares/Equity Fights AIDS is the nation’s largest industry-based, nonprofit AIDS fundraising and grant-making organization. Since its founding in 1988 the organization has distributed over $170 million for services for people with AIDS, HIV or HIV-related illnesses. For more information call (212) 840-0770 or visit www.broadwaycares.org.