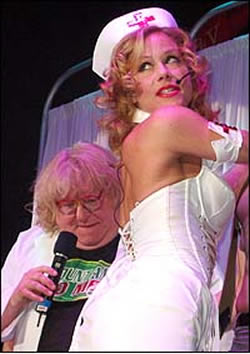 The 15th annual Broadway Bares fundraiser — benefiting Broadway Cares/Equity Fights AIDS — raked in a record-breaking $654,000 at this year’s June 19 presentations at the Roseland Ballroom.Factors contributing to the victory — which surpassed last season’s new record of $525,000 — included special VIP tickets for the midnight showing and a high intake ($220,000) from rotation (donations inserted into g-strings and whatnot), according to a production spokesperson.

Those numbers pale by comparison to Bares’ first showing over a decade ago, when 7 dancers (this year 129 participated) including executive producer and 2005 Tony Award winner Jerry Mitchell raised $8,000 for the charity.

More Bares history: Over a decade ago, Mitchell, who once danced nearly naked on a drum in The Will Rogers Follies, found himself inspired to take it all off to raise money for Broadway Cares/Equity Fights AIDS, and Broadway Bares was born. Last season’s competition — executive produced by Mitchell and directed by Jodi Moccia — brought in a whopping $525,000. Frozen’s Swoosie Kurtz and 42nd Street’s Shirley Jones and Patrick Cassidy were the evening’s hosts.

Broadway Cares/Equity Fights AIDS is the nation’s largest industry-based, nonprofit AIDS fundraising and grant-making organization. Since its founding in 1988 the organization has distributed over $100 million for services for people with AIDS, HIV or HIV-related illnesses. For more information, visit www.broadwaycares.org.