Jerry Mitchell Announces BROADWAY BARES Breaks a Million!
Back to the Article
by BWW News Desk 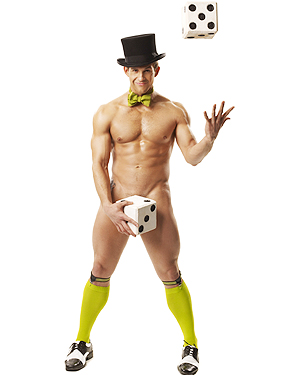 An official release is expected shortly.

This year’s opening number was entitled “The Best Game in Town,” and is written by David Nehls (The Great American Trailer Park Musical). The number was performed by Euan Morton (Sondheim on Sondheim).

BROADWAY BARES XX: “STRIP-OPOLY” aimed to reach their $1 million fundraising goal to benefit BC/EFA. This year’s BROADWAY BARES brought a whole new definition to the phrase “game night” when over 200 of Broadway’s sexiest dancers came together for the hottest burlesque show this side of Park Place.

BROADWAY BARES XX: “STRIP-OPOLY” was produced by Broadway Cares/Equity Fights AIDS, Executive Produced by Tony Award-winner Jerry Mitchell (Love Never Dies, Catch Me If You Can, Legally Blonde), and will be directed by Josh Rhodes (The Drowsy Chaperone, Fosse).

The first Broadway Bares in 1992 featured seven dancers stripping on a bar and raised over $8,000. Since then, the 19 subsequent editions of BROADWAY BARES have collectively raised over $6 million to benefit Broadway Cares/Equity Fights AIDS and grown to a full-fledged production featuring over 200 of Broadway’s sexiest dancers.

BROADWAY BARES is the hotly anticipated annual event combining the naughtiness of burlesque and the razzle-dazzle of Broadway and has been a smashing success since its inception in 1992. The event features the hottest male and female dancers on Broadway and has become one of Broadway Cares / Equity Fights AIDS’ signature events. The 2010 edition, BROADWAY BARES XX: “STRIP-OPOLY” was held at Roseland Ballroom (239 West 52nd Street) on Sunday, June 20 with performances at 9:30 PM and midnight. For more information, visit www.BroadwayBares.com.

Broadway Cares/Equity Fights AIDS is one of the nation’s leading industry-based, nonprofit AIDS fundraising and grant-making organizations. By drawing upon the talents, resources and generosity of the American theatre community, since 1988 BC/EFA has raised over $175 million for essential services for people with AIDS and other critical illnesses across the United States.

For more information, please visit the BC/EFA website at www.broadwaycares.org.