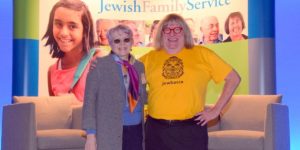 Boulder JFS held its fifth annual fundraiser, “Reel Hope Boulder,” on Saturday night at the Boulder JCC, and it was the most successful outing of the series.  Hollywood writer Bruce Vilanch not only entertained the crowd while being interviewed by Ron Bostwick, but did so for free, raising the net amount available for operations from the night’s take.  In addition to Vilanch, new JFS CEO Shepard Nevel addressed the audience, and JFS of Colorado Board Chair Charlie Gwirtsman was in attendance. Thanks to a match offered up by Jerry and Gail Sloat, the event raised over $90,000 for JFS of Colorado’s Boulder operation, led by Cathy Summer.

Jerry Sloat said this about why he supports JFS:

My slogan for JFS is “We are your family; you are never alone.” We all have family where we came from and many of us don’t have family here. We all need family around us and JFS represents that.

Andy Miro (event co-chair, Boulder JFS advisory committee member) supports JFS and wanted to co-chair the event because “JFS does so much for the community where the help is really needed. It’s very meaningful to be a part of it.” As event co-chair, Andy was very thankful about how well it went: “Bruce was everything I expected. He was very personal, approachable, and I felt like I’ve known him for years. He was fantastic. People stayed until the very end of the event, which is key. It was successful and I’m happy with how it went!”

Karli Sherwinter (event committee, Boulder JFS advisory committee member) said, “I like to be involved in a direct service organization where the money raised goes to directly support individuals in need.”

Here is the full album of pictures.