Mister D: Bette Midler and others celebrate his guest performance in the New York Play, “Spalding Gray: Stories Left to Tell” New York City, 04/25/2007. I saw Phoebe Snow came too. I love her and wish she would get an album out now…! 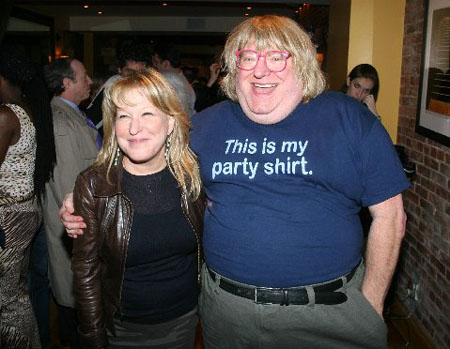 Emmy Award winner Bruce Vilanch will be the next actor to guest star in Spalding Gray: Stories Left to Tell, the Off-Broadway production at the Minetta Lane Theatre that features Frank Wood, Kathleen Chalfant, Hazelle Goodman and Ain Gordon.

Comedic writer-actor Vilanch will play a guest stint in the new production April 24-May 6. He will follow former â€œSaturday Night Liveâ€ star Rachel Dratch, who has just extended her stay in the show through April 22. Previous guest stars have included Josh Lucas, Richard Kind, Fisher Stevens and Estelle Parsons.

Stories to Tell was co-created by Grayâ€™s widow, Kathleen Russo, and Lucy Sexton, who also directs. The show, according to press notes, â€œunfolds chronologically, from recollections of childhood swimming trips with his mother (who also committed suicide) and tales of awkward adolescent sexual encounters, to the joy Gray took in being a father himself.â€ The production includes diary extracts as well as excerpts from Sex and Death to Age 14; Terrors of Pleasure; Swimming to Cambodia; Impossible Vacation; Grayâ€™s Anatomy; Monster in a Box; Itâ€™s a Slippery Slope; Morning, Noon and Night; and Life Interrupted.

The Naked Angels Production is being presented by Eric Falkenstein and Michael Alden. The production, which was originally scheduled to close May 13, is now playing through June 10.

Spalding Gray won an Obie Award for Swimming to Cambodia and filmed the monologue with director Jonathan Demme. Other works include Morning, Noon and Night; Monster in a Box; Grayâ€™s Anatomy; and Itâ€™s a Slippery Slope. He performed on Broadway in Our Town and Gore Vidalâ€™s The Best Man. After a series of bouts with depression, Gray took his own life in 2004 by jumping from the Staten Island Ferry into the waters of New York Harbor.

Bruce Vilanch made his Broadway debut in Hairspray, after having played the role of Edna Turnblad for over a year in the showâ€™s national tour. An Emmy-winning comedy writer, Vilanch has written for the Oscars, the Emmys, the Tonys and the Grammys. He is also the author of â€œBruce! My Adventures in the Skin Trade and Other Essaysâ€ and is the subject of the documentary â€œGet Bruce!â€ He spent four seasons on â€œHollywood Squaresâ€ and also appeared in his own one-man show. Vilanchâ€™s other credits include â€œIt Nearly Wasnâ€™t Christmas,â€ â€œThe Morning After,â€ â€œBosom Buddies,â€ â€œThe Ice Piratesâ€ and â€œCall Me Claus.â€

Spalding Gray: Stories Left to Tell plays Tuesdays-Saturdays at 8 PM, Sundays at 7 PM with matinees Saturdays and Sundays at 3 PM. The Minetta Lane Theatre is located in Manhattan at 18 Minetta Lane, just off Sixth Avenue.