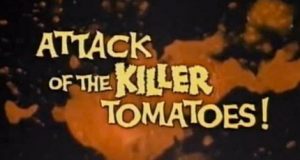 An unlikely candidate for a franchise, Attack of the Killer Tomatoes, as goofy as it is, spawned three sequels, a cartoon series, a video game, and a toy line during the 1980s and 1990s. Long-since dormant, it’s wild to think that at one time an amateur spoof movie with a budget of less than $100,000 had the potential for other things. Shepherded by director John DeBello and writers and producers Stephen Peace and Costa Dillon, Attack of the Killer Tomatoes isn’t necessarily a film that you’d try and defend as some kind of a masterpiece that’s been misunderstood. No, even its creators know exactly what it is, but they, like many other people, embrace it and continue to wave its flag nearly 40 years after its initial release.

Attack of the Killer Tomatoes always eluded my tiny child mind way back in the 1980s. I remember seeing it on the shelf at a video store and being not quite sure what to make of it. Was it scary? Was it funny? Was it a cartoon? In actuality, it’s none of those things. It’s a really dumb movie, through and through; juvenile to its very core, but in a way that’s charming. It’s as if a group of high school students with decent filmmaking abilities put on a local production. Even the folks behind it had only ever made a handful of Super 8 short films, which is where the idea for the film originated in the first place.

Although it’s a fourth-wall breaking romp with little on its mind other than zaniness, Attack of the Killer Tomatoes is oddly delightful. In all honesty, I don’t know if you could take this premise and make something serious out of it. Who would be able to take a movie about killer tomatoes invading the nation seriously? And whether they’ll admit it or not, the film did have an influence on future filmmakers. Look no further than the plot of 1996’s Mars Attacks, directed by Tim Burton, in which invading aliens can only be subdued by awful music. If that’s not a nod to Attack of the Killer Tomatoes, I’ll eat my hat.

Now available as a part of the MVD Rewind Collection, this Special Collector’s Edition Blu-ray release of the film comes armed with a newly remastered 4K transfer of the film. By its very nature, it has never been a film that’s ever really looked that good, especially if you saw it in the VHS era when it looked rather dark and dingy. Thankfully, that’s no longer the case. In fact, it’s remarkable how good the film now looks. With even grain levels (aside from the stop-motion animation scenes), high amounts of fine detail, and a crispness to the presentation that was otherwise absent before, it’s never looked better. Color is also improved with more striking hues while black levels are deep with (likely) inherent crush. Contrast and brightness levels are excellent as well. There isn’t a whole lot of film damage leftover other than some staining and there doesn’t seem to be any digital anomalies on display. It still looks and feels like the period that it was shot in, but it’s miles better than any previous release. The lone audio option to go with it is an English 2.0 mono LPCM track with, unfortunately, no subtitle options. The film contains a variety of dialogue elements (including the obvious overdubbing of the Asian scientist, for instance), as well as pre-recorded musical numbers and location sound during crowd sequences. I didn’t notice any distortion, clicks, or pops – only one minor dropout during a scene transition. However, everything comes through clearly with decent fidelity and some minor LFE.

This release also contains quite an extensive and almost complete set of bonus materials, including nearly everything from the 25th Anniversary DVD release. This consists of an audio commentary from writer/director John DeBello, writer/co-star Steve Peace, and creator Costa Dillon; Legacy of a Legend, a brief featurette containing interviews with John DeBello, Costa Dillon, film critic Kevin Thomas, fans Kevin Sharp and Bruce Vilanch, and actors John Astin, Stephen Peace, Jack Riley, and D.J. Sullivan; Crash and Burn, a brief discussion about the film’s famous helicopter crash; a set of Super Duper 8 Prequels: Attack of the Killer Tomatoes, the original 8mm short film with optional audio commentary from DeBello, Peace, and Dillon, and Gone with the Babusuland, another 8mm short film with non-optional audio commentary, also from DeBello, Peace, and Dillon; Famous Fowl, which covers the San Diego Chicken as seen in the film; 3 deleted scenes in standard definition; Killer Tomatomania, which contains interviews with random people about the film; Where Are They Now?, which checks up on what the cast and crew are currently up to; We Told You So!, a tongue-in-cheek look at the real-life horrors of the killer tomatoes; a set of Sing-Alongs (Sidewalk Sing-Along, Main Theme, The Mindmaker Song, Tomato Stomp, Puberty Love, Love Theme); Slated for Success, a discussion about the film’s slate girl; the original theatrical trailer in SD; 2 radio spots; a trailer for D.O.A.: A Right of Passage; a DVD copy; and a fold-out mini-poster of the main artwork. Also included on the disc is an Easter egg. On the first page of the “Chapters” menu, highlight “Next”, press down, and a tomato will appear on the left side of the screen, which will lead you to their Super 8 version of an intermission. Not included from the 25th Anniversary DVD release is Tomato Mode, Tomato Trivia, the Killer Stuff photo gallery, the Production Design photo gallery (which is mentioned on the back cover of this release, but ultimately not included), and the two previous Easter eggs featuring Lloyd Kaufman and the aforementioned San Diego chicken.

Made with nothing more than passion by a group of amateur filmmakers, Attack of the Killer Tomatoes might be described by its fans as a guilty pleasure. I’d actually go so far as to label it the very definition of the term. It’s not so bad that it’s good, but it’s an enjoyable diversion with honest intentions. MVD Rewind’s treatment of it is to be commended and is the definitive release from here on in and fans will definitely want to eat it up.