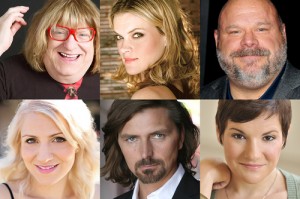 (VERB)____ until your sides hurt on Monday, July 27 at The Rockwell Table & Stage, where Villain: DeBlanks will be performed to benefit the ASPCA.

A Time Out NY Critics’ Pick written by Billy Mitchell, Villain: DeBlanks is an uproarious improvisational comedy where the cast says words you put in their mouths! The audience provides nouns, adjectives, and verbs (the wilder, the better), and the actors provide the laughs — uncensored and unrehearsed — as they enact the story of Philip DeBlanks’ untimely demise. It’s “Clue” meets adult “Mad Libs,” performed by some of the funniest people in show biz. Like a ride to summer camp in the back of a station wagon, this hilarious performance will be ridiculously one-of-a-kind.