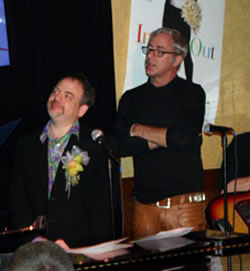 If you’d like to have an insight into why Hairspray is such a uniquely joyous musical, try spending some time with Marc Shaiman and Scott Wittman.

This unlikely duo provided the lyrics and music for the Tony-winning Broadway smash now in rehearsal for a May 5 opening at the Princess of Wales Theatre, and they’ve come to Toronto to check up on their baby.

They’re also the team who wrote this year’s opening Oscar medley for Billy Crystal, and Shaiman, 44, has acquired infamy as the co-author of the irreverent songs from the movie South Park: Bigger, Longer & Uncut, including “Blame Canada.”

They’re sitting at a corner table of the Rooftop Lounge at the Park Hyatt and the first thing you notice is how different they are.

Wittman, 49, is taller and decidedly more laid-back than Shaiman’s diminutive bundle of kinetic energy. If they were comedians, Wittman would be Steve Martin to Shaiman’s Jackie Mason.

But despite all this (or maybe because of it) they’ve been happy life partners for the past 24 years. Both were raised just outside of New York city, but loved musicals from an early age. And then fate brought them together.

Wittman: “We met in Manhattan by chance.”

Wittman: “I was directing a nightclub parody show in Greenwich Village.”

Shaiman: “I wandered in and started playing the piano in the bar while waiting for some friends.”

Wittman: “I asked `Can you play “Together Wherever We Go,” only cheesy?'”

Shaiman: “And I said, `Like you mean for a bar mitzvah?'”

And that was it, although when asked if it was love-at-first-sight stuff, Shaiman quips, “No, we’re still waiting for that to happen.”

They started writing together immediately, songs that Shaiman characterizes as “full of anarchy and joy,” only to have Wittman dryly observe that “it took Broadway 20 years to catch up with us.”

Unfortunately, Mattel Toys closed it down on the eve of its uptown N.Y. transfer “and Scott was depressed for 15 years,” recalls Shaiman.

In actuality, Wittman started a career as a stager of one-woman shows for Patti LuPone, Sarah Jessica Parker, Bette Midler and others. “I’m a great diva wrangler,” he chuckles, “kind of the Margaret Mead of musical theatre.”

Shaiman spent a lot of his time in Hollywood (“Two coasts, that’s the secret of our relationship”), providing music for projects as varied as Sister Act, Sleepless In Seattle and — of course — South Park.

He was nominated for an Oscar for writing the mock-inspirational march “Blame Canada,” which he now reveals came out of a moment of desperation.

“The shootings at Columbine had just happened and we couldn’t put anything too potentially serious in a song. I said, `It needs to be something silly like this,’ and it all just plopped out.”

There was one lyrical problem, however. “Originally, one line went `All that hockey hullabaloo and that slut Anne Murray, too,’ but Paramount’s legal department wouldn’t let us call her a slut. We asked if `bitch’ would be all right and they were just fine with that.”

So was Murray, although she politely declined the offer to sing it at the Oscar ceremony.

Then, Broadway producer Margo Lion got the idea to turn Hairspray, John Waters’ cult 1988 film about rock ‘n’ roll and racial tensions in 1962 Baltimore into a musical, and her first act was to sign up Shaiman and Wittman, who leapt at the chance.

The normally ebullient Shaiman nearly bubbles over recalling it. “I love that era of music, I’ve been surrounded by it all of my life. I was born to write that show!”

“He is very Tracy,” whispers Wittman, comparing his partner to the chubby, extroverted 16-year-old heroine of their musical.

“Absolutely!” agrees Shaiman. “It’s all about the outsider winning in the end and everyone can relate to that, which is the ultimate triumph of the show.”

When Hairspray finally opened on Broadway in August of 2002, it was an instant smash, earning rave reviews from all the critics and garnering an impressive eight Tony awards, including Best Musical.

It was on that Tony award night in June of 2003 that Shaiman and Wittman became world-famous by exchanging a giant kiss and declaration of love on live TV when accepting their award for Best Score.

Despite the political kick it provided, they both insist it was purely impulsive. “It wasn’t planned at all,” says Shaiman. “You’re up there having your Tom Hanks moment and you think `I want to thank my spouse. Oh look, he’s right here!'” He grins. “You know what’s nicest? It’s that our 15 minutes of fame were actually about something.”

They claimed the spotlight again on the recent Oscar broadcast, when they provided host Crystal with his showstopping opening sequence.

“Although there was a lot of pressure this year because of Janet Jackson’s Super Bowl antics,” moans Shaiman.

“Never mind,” grins Wittman, “we got our revenge.”

Which they did, with a “My Favorite Things” parody which included:

“Frodo and Sam on a mystical planet/ Smeagol pops out like the left boob of Janet.”

“The only problem,” adds Wittman, “was that (the audience) laughed so hard nobody heard the next line,” which Shaiman promptly provides: “Britney and J. Lo. brought both of their flings/They thought it was called The Return Of The Rings.”

But the two of them are still happiest sneaking into Hairspray and watching the reactions of the crowd.

“I love to sit down front, off to the side,” admits Shaiman, “and check out the smiles of the audience during the final minutes of the show. Man, they all look like kindergarten kids on crack!”

Wittman laughs and beams at his partner. After 24 years, they’re still a great team — both on stage and off.