Park Me
An Interview with Bruce Vilanch
By Kevin
July 1, 2013 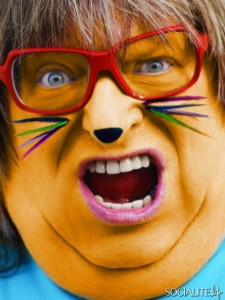 In Los Angeles, traffic and parking are part of the daily grind and everyone’s got a fun story to tell.

We’ve noticed that parking often merges with LA culture, whether it’s a viral video of Larry David getting stuck, or a clever tune about the happenings in the Whole Foods parking lot. When we can, we like to seek fun and notable locals to get their own perspectives on the rituals of parking around town. Nobody’s more fun than West Hollywood’s own Bruce Vilanch.

Vilanch, a six-time Emmy award winner and head writer of The Oscars since the year 2000, was kind enough to chat with us about his experiences. He’s a prolific comedy writer, so we knew we were in for some witty responses about parking, particularly within “The Biz.” We hope you enjoy Bruce’s unique responses as much as we did!

What’s your favorite thing to do on a LA Sunday?

I’m a Jew! We like to eat Chinese food and go to the movies. We would do that whether we were in LA or Baghdad.

What’s the best restaurant for a first date?

(Laughs) Any place that has flattering lighting. Angela Lansbury’s dressing room would probably be a good spot.

Parking on the Fox Studios lot used to be heinous until they built a new garage. I used to park in Natalie Wood’s space. She’d been dead for years, but they’d never gotten around to re-assigning it. Odds are she wouldn’t be coming in on any given day, so who would notice? She had also been a friend, so I felt like she was urging me on from above. “Don’t be a schmuck,” I could hear her shouting in her daisy clover voice. “Park!”

One day I pulled into Fox and the name Saul Turtletaub was painted on the curb. He was an esteemed comedy producer, not one of the teenage ninja turtletaubs. I turned right around and went to Warner Brothers.

Larry David coined the term “pig parker” for someone who takes us two spaces while parking. Have you ever been guilty of this?

Never. I would not want to incur the satirical wrath of Larry David, unless there was real money in it.

Have you ever had a confrontation/meltdown with someone over a spot?

Life is too short to get worked up over a parking space. I always remember Clint Eastwood’s spot at Warner Bros. He’s got a sign in front of it that has his name in large letters and, beneath that, the legend: don’t even think about parking here. I’ll bet that scared Meryl out of her Italian accent.