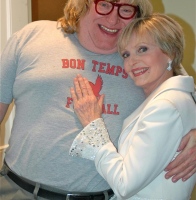 The John Drew Theater at Guild Hall event, titled “A Bipolar Evening With Friends: Florence Henderson and Bruce Vilanch,” benefited, in part, Broadway Cares/Equity Fights AIDS, as Henderson literally passed the hat near the opening of her portion of the show.

Promising to “tell the truth” in this musical revue of her life story, Henderson — best known as the wife and mom on the hit ’70s TV series “The Brady Bunch” — dished about her apparently squeaky clean personal past. She says she was a virgin when she married Ira Bernstein, the father of their four children. She never had an affair with Richard Rodgers, her womanizing mentor who discovered her during an audition for the national tour of “Oklahoma!” She “probably could have,” but didn’t have an affair with Frank Sinatra. And, at 76 — she’s in terrific shape: “I do Pilates three times a week, but what happened to the men my age?” — the twice-married widow of eight years is open to dating again.

When asked at a reception after the show, Henderson said that while no one could top Christine Ebersole in the lead role of “Grey Gardens” (Ebersole comes to Guild Hall for a concert this weekend), the John Drew Theater should “deifnintely do ‘Grey Gardens,’ ” the Tony-winning musical set in East Hampton.

Bruce Vilanch, who connected with Henderson in the ill-fated “Brady Bunch Variety Hour,” which lasted all of nine episodes, opened with a standup routine about his career as a writer for beauty pageants, and for the last 21 years, the Academy Awards broadcast. He recalls introducing Sophia Loren to Jack Black. “She had no idea who he was and started talking in menu Italian. That’s when you know you’re in trouble.”

Despite his joke about Montauk Highway traffic — “I got a house out here in April and I’m still trying to get there on [Route] 27” — Vilanch, who lives in California, doesn’t have a place in the Hamptons. He brought along his mother, Henrietta, for the show.

Henderson, who also lives in California, said the Guild Hall show brought her to the Hamptons for only her second time. “It’s lovely,” she said, “except for the humidity.”