New York Times
Academy Awards 25 Years Ago: Not So Different From Today
By BRUCE FRETTS
FEB. 24, 2017 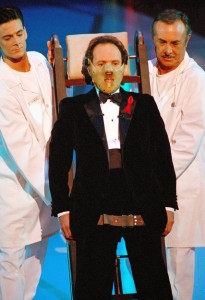 From the moment the host Billy Crystal was wheeled onstage wearing a straitjacket and a face mask à la Hannibal Lecter in “The Silence of the Lambs,” viewers knew the 1992 Oscars were not going to be normal.

“It was a bit like Mr. Toad’s Wild Ride,” Jodie Foster, the “Silence” star who won best actress that year, recalled in a telephone interview. “You were being catapulted from one surreal experience to the next.”

The circumstances surrounding the Academy Awards 25 years ago were not so different from the ceremony set for Sunday: Presidential politics served as the backdrop (in that case, Bill Clinton and Jerry Brown, whom Mr. Crystal jokingly compared to that year’s self-destructive cinematic rebels Thelma and Louise, were trying to unseat President George Bush). Major social issues played out at the podium (then it was homophobia and sexism), and black filmmakers were making inroads. But in 1992, four of the five best-picture nominees were among the year’s top 20 domestic box-office hits; this year, that’s true for only two of the nine contenders (“Hidden Figures” and “La La Land”).

“In those days, people still believed the recipe to make a popular film was to make a good film,” Ms. Foster said. “The way the economy has shaped the industry over the last 25 years, it’s ghettoized films into either big, dumbed-down mainstream movies that are trying to attract as many audience members as possible, and movies that are substantial and meaningful, which are relegated to a different sphere.”

I asked winners, nominees and one of the show’s writers about that year’s most memorable moments.

A review in The New York Times described the 1992 ceremony as “uncharacteristically lively,” and that began with the first bit the writers devised for the host. “It’s a great entrance for Anthony Hopkins in the movie, so we knew it would work with Billy,” Bruce Vilanch, one of the telecast’s writers, said in a recent telephone interview. “It was kind of irresistible.”

“It was an odd thing to say at the Academy Awards,” Mr. Vilanch said, recalling a specific line in the speech. “But that was Jack. He was a genuinely strange and scary guy.”

Then, in a display of his virility, the 73-year-old character actor dropped to the floor and did one-armed push-ups. Backstage in the writers’ room, “we looked at each other and said, ‘We have to go with this — it’s too funny.’” Thus began a run of on-the-fly jokes from Mr. Crystal (“I was just given a bulletin: Jack Palance is now on the StairMaster”) that stretched through the night.

For supporting actress, Mercedes Ruehl won for “The Fisher King,” but it was one of her competitors, Diane Ladd, who made Oscar history. She was the first mother to be nominated along with her daughter (Laura Dern) for the same film, the Southern drama “Rambling Rose.” Ms. Dern and Ms. Ladd also presented the award for best visual effects to “Terminator 2: Judgment Day.”

“When I was standing on that stage, and I looked out at my peers and then over at Laura, it was a great honor,” Ms. Ladd said. “I had to fight to keep from crying.”

A Surprise From Space

More emotional moments played out as George Lucas received the Irving G. Thalberg Memorial Award from his old friend Steven Spielberg and, in a bit of technical wizardry, the crew of the Space Shuttle Atlantis, complete with a floating Oscar. Another satellite link allowed the acclaimed Indian director Satyajit Ray to accept his honorary Academy Award from his hospital bed in Calcutta; he died 24 days later at 70. “Gil Cates, who produced that show, loved technology,” Mr. Vilanch said. “He always had remotes.”

Many Oscar ceremonies come with some controversy, and the 1992 show had its share. Gay-rights advocates picketed over villainous characters in “Silence” as well as in “J.F.K.” (Tommy Lee Jones was nominated for best supporting actor for his turn as a gay man put on trial and acquitted for an alleged conspiracy to kill the president) and in the just-released “Basic Instinct,” which starred Sharon Stone, who was also a presenter. “It was a good discussion, but it was also very stressful,” Ms. Foster said.

The protesters could take solace in the fact that Howard Ashman — who had died a year earlier at 40 — became the first person lost to AIDS to win an Oscar: best original song for “Beauty and the Beast.” His longtime companion, Bill Lauch, accepted the award on his behalf.

Disney’s wildly popular “Beauty and the Beast” stirred up discord when it became the first animated film nominated for best picture, which didn’t sit well with some Oscar purists. “They created the best animated feature category after that because they didn’t want more cartoons nominated for best picture,” said. Mr. Vilanch. (Only “Up” and “Toy Story 3” have managed the feat since.)

The night’s loudest contretemps surrounded Barbra Streisand, who was passed over for a best director nomination even though her drama “The Prince of Tides” snagged a best picture nomination. The group Women in Film cited sexism. “In some circles, they said I took her slot,” said John Singleton, who at 24 became the youngest and first African-American best director nominee, for his searing debut, “Boyz N The Hood.” “What people don’t know is that I’m a huge Barbra Streisand fan. She signed my application to get me into the Directors Guild.”

Mr. Crystal gracefully defused the situation with a satirical lyric during a musical number. Referring to “The Prince of Tides,” he crooned, “Seven nominations on the shelf, did this film direct itself?” The cameras quickly cut to Ms. Streisand, laughing appreciatively.

Mr. Singleton lost best director to Jonathan Demme for “Silence,” but he had higher hopes of winning best original screenplay. Yet the award went to another first-timer, Callie Khouri, for the feminist road-trip saga “Thelma & Louise.”

“I was trying not to jinx myself, so I wrote an acceptance speech in pencil,” Ms. Khouri said. “By the time I opened it up, I couldn’t make heads or tails of it, so I just winged it. I forgot to thank the producer, so that was fairly horrifying.” (For the record, Mimi Polk Gitlin produced the film.)

The biggest winner, of course, turned out to be “The Silence of the Lambs,” which became only the third film in history, after “It Happened One Night” and “One Flew Over the Cuckoo’s Nest,” to sweep the top five awards: best picture, director, actor, actress and adapted screenplay (by Ted Tally, based on Thomas Harris’s novel).

“Three years earlier, I had won best actress for ‘The Accused,’ and I was the only person nominated from the film, so I was by myself,” Ms. Foster said. “But for ‘Silence,’ it was really extraordinary — we kept winning, one after the other, and we all met backstage. I remember everybody was really hot and sweaty, and we all had our arms around one another.”