Bruce On The Tube Bruce Related Television
Spread the love 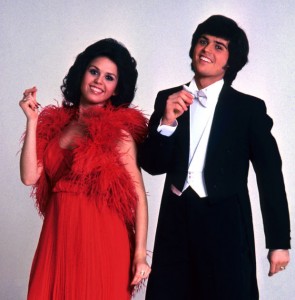 Family act Marie and Donny Osmond took primetime television by storm when “Donny & Marie” premiered on January 23, 1976. (Photo: ©ABC/Photofest)
Happy Anniversary, Donny & Marie! Can you believe it’s been 40 years since the variety program turned Friday nights into must-see-TV? Its debut in 1976 took primetime by storm, singing and dancing its way into television history with a jaw-dropping 14 million viewers a week.?? It may be hard to count all the ways Donny & Marie was such a show-stopping success – but here are our 7 Reasons ‘Donny and Marie’ Ruled the ’70s:

Fourteen-year-old Marie Osmond reached the top of the charts with her country hit “Paper Roses” while Donny was busy rocking out with their brothers – and when the two co-hosted The Mike Douglas Show, their creative chemistry was so undeniable that execs at ABC gave them their own show. America tuned in each week to watch the charming siblings butt heads, trade lighthearted barbs and insults and needle each other as only brothers and sisters can do. Yeah, “A Little Bit Country, a Little Bit Rock ‘n’ Roll” wasn’t just the show’s opening song – it was a way of life for the duo.

Huge musical productions were a hallmark of the hit variety show, with big brother and little sis helming some of the biggest and glitziest dance numbers on television. Joining the choreography team was 1960 Olympic Pairs Figure Skating Gold Medalist Robert Paul, who struck gold again with the show’s elaborate skating routines. Hey, it didn’t matter if you were too cool for school – there was just no denying that those ice-skating numbers were ice-HOT!

With comedy luminaries like Bruce Vilanch on the writing staff, is it any surprise that laughs ran rampant on the show? Sure, the sketches were jam-packed with groan-worthy puns and wholesome parodies (and was even described by critics as syrupy saccharine) – but it was all in good, family fun. Donny himself has admitted that the bits were corny, but added that when he watches it, “I catch myself smiling” and points out “That’s tacky, but I’m still smiling, you know?” Well, we all were, Donny!

<iframe width=”420″ height=”388″ src=”https://www.youtube.com/embed/4ZBWY57AoTI” frameborder=”0″ allowfullscreen></iframe>
The Costumes Were Out of Control

They say image is everything – and a big part of Donny & Marie was its flashy, flamboyant getups. In fact, the production recruited one of the biggest names in fashion, nine-time Emmy winner and three-time Oscar nominee Bob Mackie, who’s dressed entertainment legends such as Joan Rivers, Cher, RuPaul, and Diana Ross. With the way Mackie kept Marie sparkling in some of the most extravagant fashions of the day, it’s no wonder he earned the nickname “Sultan of Sequins”!

Everyone Who Was Anyone Was On the Show

With the huge ratings Donny & Marie was pulling in each week, every celeb of the day clamored to get on the hit show for maximum exposure – that’s why when audiences tuned in, they’d catch some of the decade’s biggest movers and bellbottom shakers! Just a handful of their superstar guests included comedians Bob Hope, George Burns, Lucille Ball, Milton Berle, Nipsey Russell; and musical guests Paul Anka, Tina Turner, Chubby Checker, Sonny and Cher, and Chuck Berry. If you were hot in the ’70s, you played onstage with Donny and Marie!

With a sizzling solo career under his belt and a hit network show with sister Marie, Donny Osmond catapulted to certifiable pop idol status. That’s right, long before #TeamEdward and #TeamJacob, the teen was competing with David Cassidy for the title of biggest heartthrob. So Donny-crazy was his female fan base, in fact, that some speculate that when Donny began dating his future wife Debbie, it spelled the beginning of the end for the show. Sorry, ladies, he’s still taken! 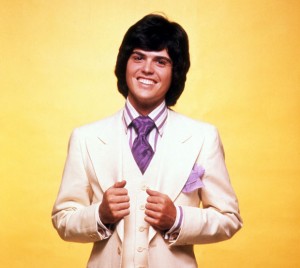