Boulder Jewish News
Find Out Why the Funniest Comics Get Bruce
By Kathryn Bernheimer ??September 25, 2017 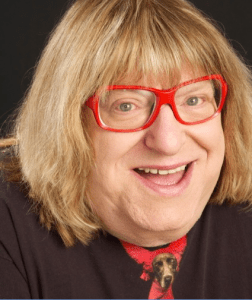 Why the title “Get Bruce?”

The title has two meanings. The first is a command issued by any high-ranking comic in need of a good joke. As in, “I have just been invited to host the Oscars! Get Bruce!”

The documentary, being screened at 2:00 pm and 7:00 pm Wednesday at the Boulder JCC, makes sure we do get Bruce, a flamboyant, sweet, outrageous giant of humor. He appears in person at Reel Hope on October 14 at the Boulder JCC. The ACE screening is in anticipation of the Jewish Family Service fundraiser.

Best known for writing the best lines and gags at the Academy Awards, where he has been head writer since 2000,Vilanch supervises the entire telecast. He is also in high demand for roasts and other Hollywood extravaganzas where actors try to be funny, and comics try to top them. Vegas shows and touring acts also demand his talent.

His jokes are told by legions of stars, including Bette Midler, Robin Williams, Elizabeth Taylor, Lily Tomlin, and Billy Crystal.

Vilanch spent his first 20 years as the king of the one-liner, comfortably behind the scenes, his name and face known only to the comic elite who employed him.

That invisibility ended when he was promoted from a writer on Hollywood Squares to having his own box as a celebrity, right next to long-time customer Whoopi Goldberg.

“Get Bruce” solidified his status as a celebrity writer, quick with a quip, a role he plays with relish.

He has since appeared on Broadway as Edna Turnblad in “Hairspray,” and is regularly recognized at airports.

He also continues to be a gay icon, long celebrated for his openly gay status in closeted Hollywood. (Read a 2013 Westword interview here.)

Prepare to meet Bruce by watching this hilarious 1999 documentary, which is filled with celebrity interviews. Prepare to be in on the joke, a comedy fan who “gets” Bruce.